We Irish love a good sing-song. VagaGuide and musical guru, John, is here with some of the very best Irish songs to sing. Altogether now...

'I met my love by the gasworks wall

Dreamed a dream by the old canal

This song is unique in that the verses, as well as the chorus, lend themselves to a sing-along. Many people mistakenly presume that the Dirty Old Town in the lyrics refers to Dublin. The song was, in fact, written about the town of Salford, in England. I still can’t help picturing Dublin when I sing it though.

Maybe this is because the song was initially made popular by The Dubliners. Ronnie Drew, the lead singer, had a very strong Dublin accent. When they were singing it, they were most likely thinking of their home town of Dublin.

Well-known band, The Pogues, also released their own excellent version of this song in 1985.

A good question, to be fair.

This song, written by a relatively unknown Irish songwriter Barney Rush, was adopted by Christy Moore — Ireland's answer to Bob Dylan — after hearing it being sung in a hotel on the island of Jersey, one night in 1969.

He said, "When I heard him sing Nancy Spain, I was instantly smitten by this beautiful song."

It wasn’t until 1976 though that Moore finally released his own version of the song. It has become a firm favourite ever since.

'No matter where I wander I'm still haunted

The portrait of your beauty stays the same

Standing by the ocean wondering where you've

Where is the ring I gave to Nancy Spain'

3. When Irish Eyes Are Smiling

One of the world's best known Irish songs that is not Irish!

Co-written by Irish-American, Chauncey Olcott, this song dates back over 100 years. It was brought into the modern era and made famous by Bing Crosby. His movie of the same name was released in 1944.

When Irish eyes are smiling

In the lilt of Irish laughter

You can hear the angels sing

I lost my heart to a Galway Girl

Didn’t we all! Sure, have you met VagaGuide Denise!?

Another favourite Irish singalong song which happens to be written by an American. This one was penned by Steve Earle in 2007.

But Galway Girl only became famous when his friend Sharon Shannon performed it with Irish artist Mundy. Irish radio picked it up. Then Gerard Butler did a rendition in P.S. I Love You. The rest is history!

This version was filmed in the heart of Galway with what appears to be most of the population of the city!

I remember that summer in Dublin

And the young people walking on Grafton street

And everyone looking so well…

Pure magic, really. And definitely one of the best Irish songs to sing out loud!

Released in May 1980, Summer in Dublin was an overnight success. It catapulted the band Bagatelle into the spotlight. Songwriter Liam Reilly was living in Dublin at the time. He says the song just ‘flowed out onto the page’. We are very grateful it did.

This video includes the lyrics so you have no excuse not to sing-along.

Find out more about some popular day tours in Dublin.

Oh poor old Dicey Reilly she has taken to the sup

Oh poor old Dicey Reilly she will never give it up

For it's off each morning to the pop

And then she's in for another little drop

For the heart of the rowl is Dicey Reilly

With its catchy clap-along chorus, this is an all-time favourite of many a VagaGuide on tour.

Dicey Reilly is an Irish traditional song about a woman who was, shall we say, a little too fond of the drink. She is forced to visit the ‘ pop’ (pawnshop) on a daily basis to get enough money for just one more 'little drop'.

Dicey Reilly was written by Dominic Behan and made famous by The Dubliners.

7. The Rocky Road to Dublin

Hunt the Hare and turn her down the rocky road

And all the way to Dublin, Whack fol lol le rah!

This epic ballad tells the tale of a young man who leaves his Galway home and makes his way on foot to Dublin, where he jumps on board a ship bound for Liverpool.

He has many adventures along the way, stopping for the occasional drink and eventually arriving in Dublin, where his ‘bundle it was stole’.

The Rocky Road to Dublin was written by DK Gavan in the mid 19th century. It was made popular by the unique voice of Luke Kelly, of The Dubliners fame.

Since then, The Rocky Road to Dublin has been covered by some other great artists, including The Pogues and The Rolling Stones.

Where the strawberry Beds,

sweep down to the Liffey,

you'll kiss away the troubles from my brow

I love you well today

and I'll love you more tomorrow,

if you ever love me

What a great chorus. Sure ya couldn’t but sing along to this one!

The song is a monologue by a former captain of a ferry on the River Liffey in Dublin. He is singing to his wife, Molly, as he contemplates the implications of his unemployment. But all is not lost. With Molly by his side, he remains positive.

And that river never owned me, heart and soul

To the City of Chicago,

As the evening shadows fall,

There are people dreaming,

Of the hills of Donegal.

Once you see the hills of Donegal for yourself on a Vagabond or Driftwood tour of Ireland you will understand what he is singing about. City of Chicago is a sad song detailing the immigration of thousands of Irish to North America during the Great Famine of the mid 19th century.

The song was released by Christy Moore in 1984 on his hit album Ride On.

They spread throughout the nation,

Brought their songs and music,

To ease their lonely hearts.

We spend some time in Donegal on our 7 Day Vagabond Magnetic North adventure tour and our 6 Day Driftwood Northern Island tour.

Life is an ocean, love is a boat

In troubled waters, it keeps us afloat,

When we started the voyage

There was just me and you,

Now look around us,

We have our own crew

Some songs are written from the heart and this is certainly one of them. Written by Singer-songwriter Johnny Duhan. He was unsure of his own vocal capabilities so he offered it to the Christy Moore who recorded his own version in 1989.

Johnny said that the chorus of the song came to him out the blue and affected him tremendously. Mainly because he felt that it got to the nub of what family life is ultimately about - the children.

So there you have it, happy singing! 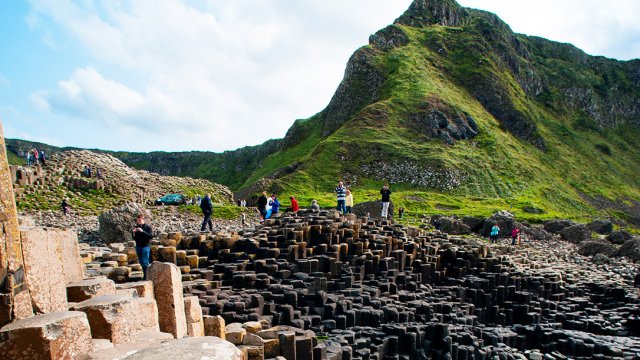