Did Your Irish Ancestors Live In A Castle?

Looking to explore ancient castles in Ireland? Look no further! Discover the top 5 best Irish castles to visit and check whether your ancestors lived in them!

A Guide To The Best Castles In Ireland - Quick Links

Have you ever wondered how your Irish ancestors lived? Were they kings or sailors? Did they live in cottages or castles?

You might not be lucky enough to enjoy a private tour of your ancestors' castle like this family did. But any visit to Ireland should include at least one visit to a castle.

The best castles to visit in Ireland are often located off the beaten path. As you might expect, Irish castles were built in strategic areas on high ground or remote coastlines.

Today, it is still possible to get up close and explore castle ruins in Ireland. As you walk through their gates and gaze out from their battlements, it's easy to imagine the strength and glory these fortresses once projected.

And remember, you can stay in an Irish castle on many of our relaxed Driftwood journeys of discovery and active Vagabond cultural adventures.

The castle is really a sprawling complex of various architectural styles from multiple periods.

Its location, perched elegantly on the banks of the River Nore, close to the Medieval Mile, offers a perfect base for exploring this early capital of Ireland. 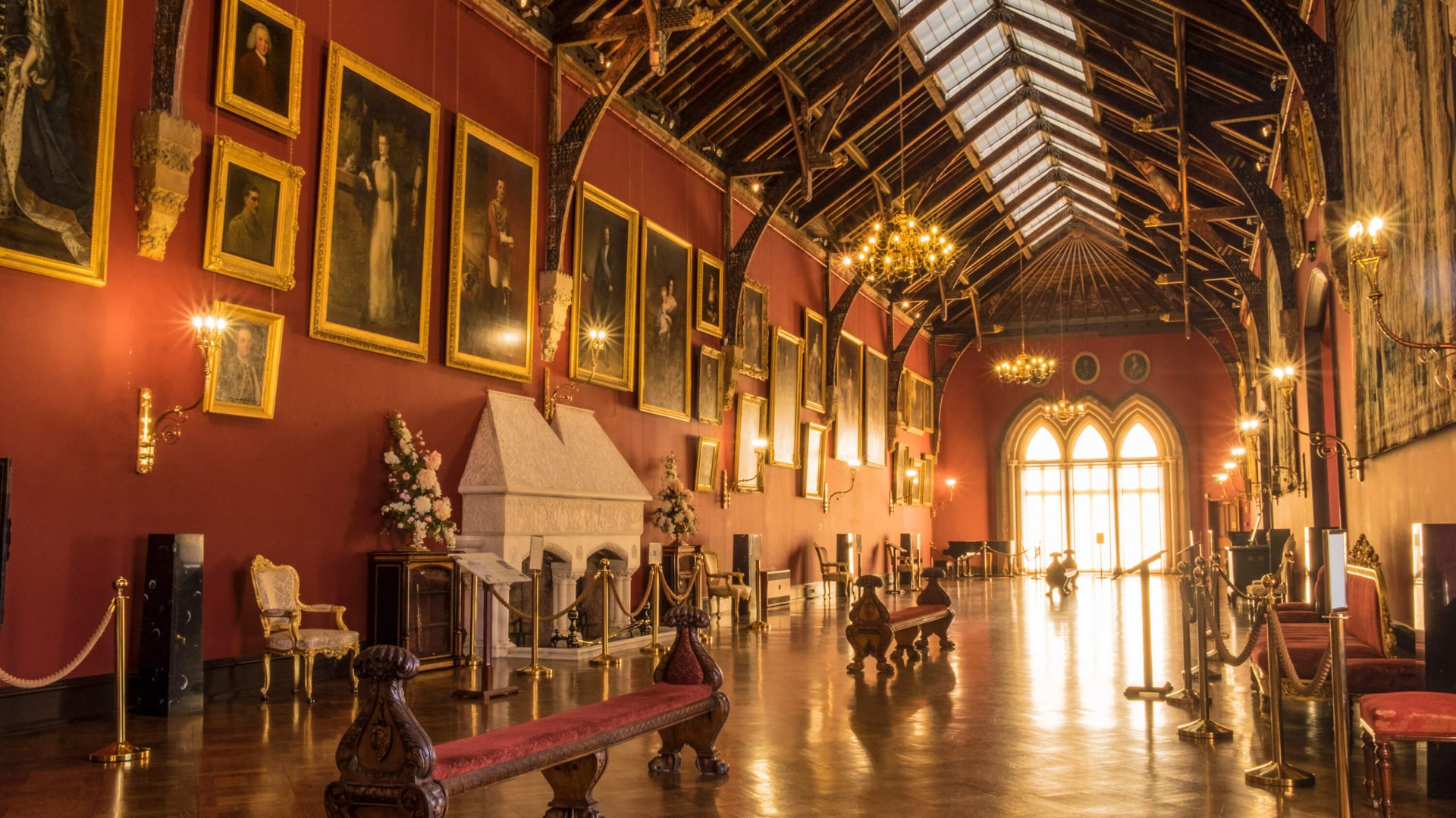 If you visit Kilkenny Castle, make sure you visit the elegant, red-walled entrance hall.

👑 Kings of Kilkenny Castle: The Normans

Not best pleased when driven from his Leinster throne in the 12th century, Dermot MacMurrough sought help from the Anglo-Norman King Henry II. Henry sent Richard De Clare, known as Strongbow, to the 'aid' of MacMurrough.

Strongbow launched a military offensive. He not only regained MacMurrough's land and his daughter Aoife's hand in marriage, Strongbow irrevocably changed the course of Irish history.

From this point (1169) until 1922, the English crown's colonial territories in Ireland expanded. As the wit goes, 'the English were invited over for a wedding and stayed for 800 years.'

Funnily enough, Irish people of Norman extraction aren't seen as English in modern Ireland. Over the centuries, settlers of Norman heritage became 'more Irish than the Irish themselves.' The southeastern corner of Ireland is where the remnants of Norman castles and culture are most common.

Built in the 15th century, Doe Castle is spectacularly located on a small peninsula in Sheephaven Bay.

Originally established by the O'Donnells, it was 'acquired' by the MacSweeneys at some stage in the 1440s. Ownership remained with the MacSweeneys until the Ulster Plantation of the 17th century

Visitors are free to explore the fully intact castle tower today. Crossing the moat, you really get a sense of what the place was like in its medieval heyday.

From its height, Doe Castle boasts stunning views of the surrounding Donegal countryside.

After the MacSweeneys and O'Donnells, it was the turn of Owen Roe O'Neill to become associated with Doe Castle.

O'Neill was a Gaelic warlord who returned from a military career on the European mainland to lead the Ulster Army of the Irish Confederates in 1642. He was recognised as leader at Doe Castle upon his prodigal return. 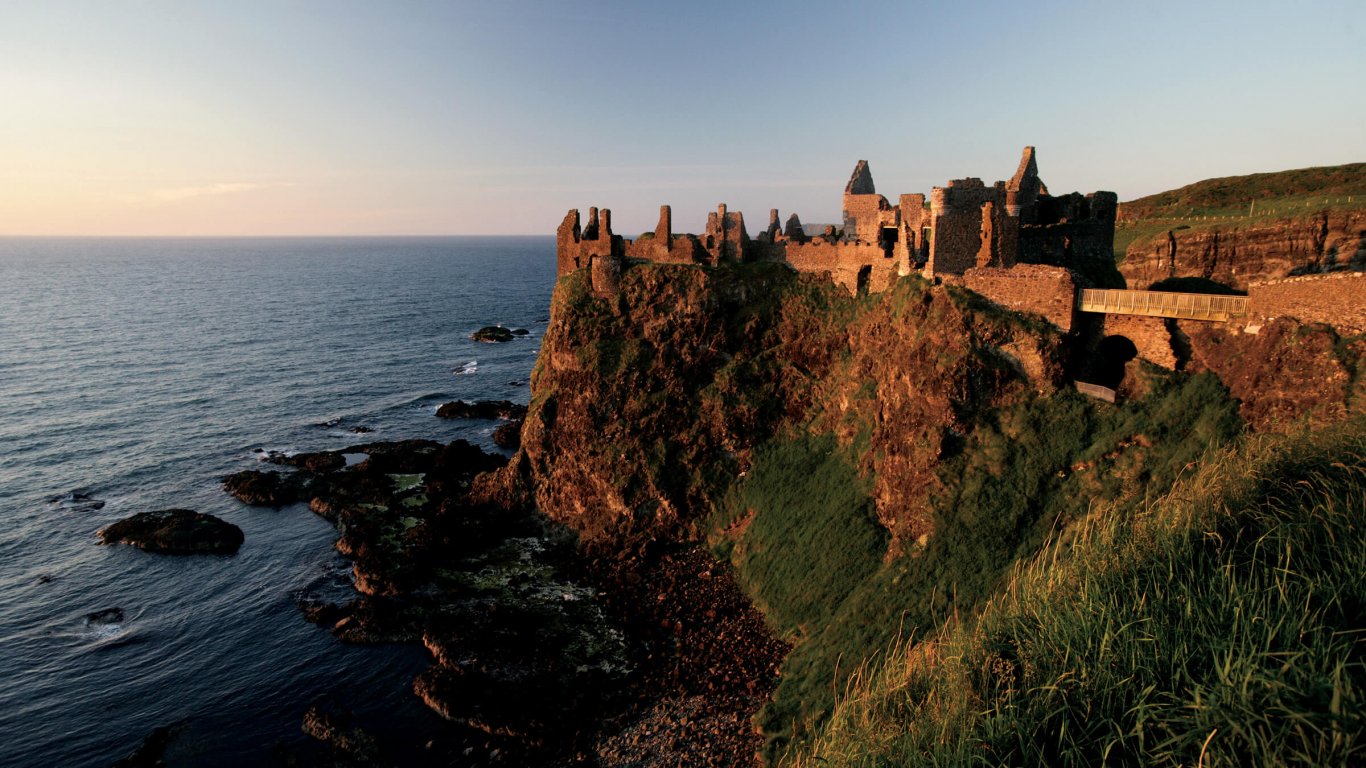 Situated on the stunning Antrim coastline is the striking Dunluce Castle. Fans of Game of Thrones might recognize it as the House of Greyjoy from the hit TV series.

First built by Richard Óg de Burgh in the 13th century, it was a stronghold of the MacDonnells that ruled in both Scotland and Ireland for a time. The castle was abandoned in 1639 by the MacDonnells when the kitchen (and the unfortunate kitchen staff) fell into the sea.

The castle is attached to the mainland by a bridge. There are guided tours of the castle, where you can learn about the fascinating history and myths surrounding this intriguing place.

👑 Kings of the Castle: MacDonnells

The Scottish McDonnell clan captured the castle in the 1600s. It was warrior chieftain, Sorley Boy McDonnell, who truly left his mark here.

Initially a rebel, Sorley Boy eventually yielded to Queen Elizabeth I. He was rewarded with a shiny new aristocratic title, power and lands.

To this day, the castle is still owned by the MacDonnell clan. 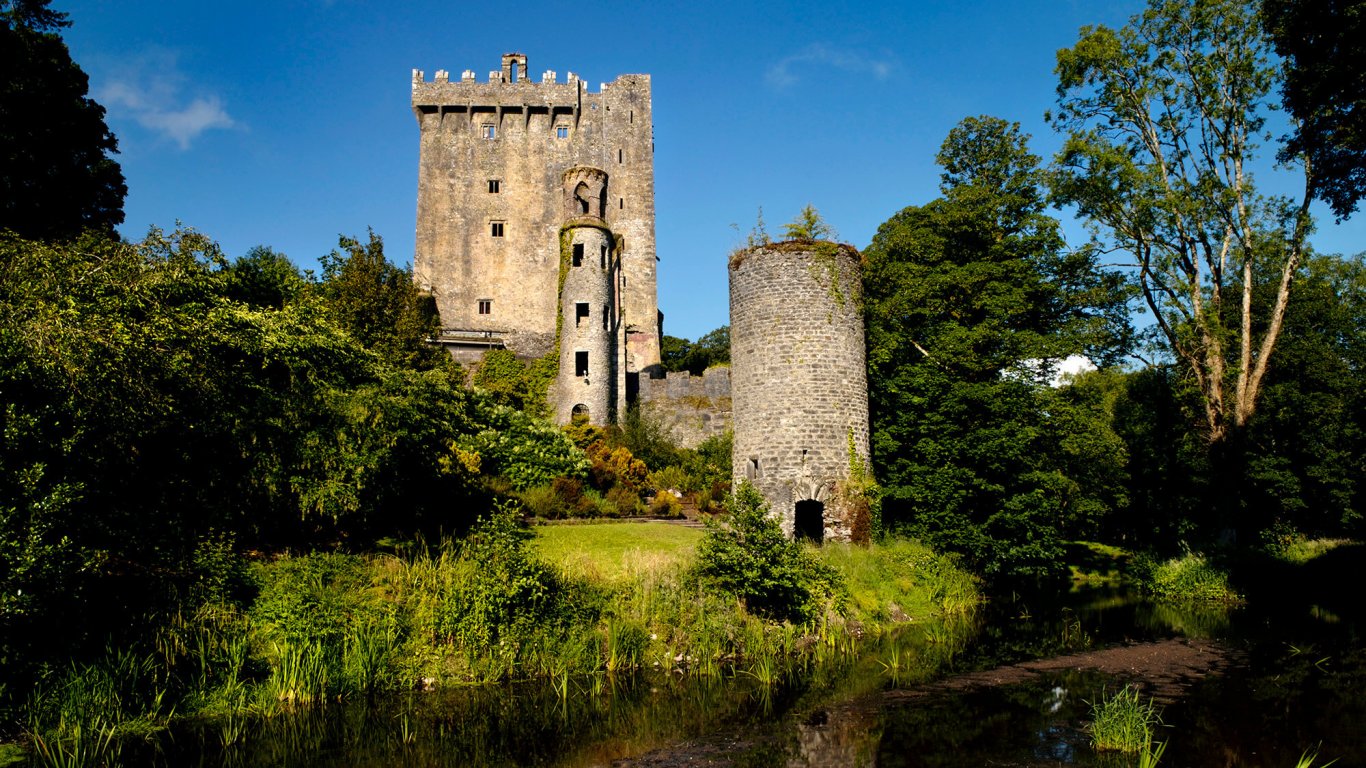 First built in the 10th century, the castle that stands at Blarney today was built by Dermot McCarthy, King of Munster in the 15th century.

English forces captured the castle in the 17th century. When they entered the castle after breaking the tower walls, they found everyone had fled through three underground passages. The castle was then acquired by the Jefferyes family before being passed into the hands of Colthurst family by marriage in the mid-19th century, who still own it to this day. 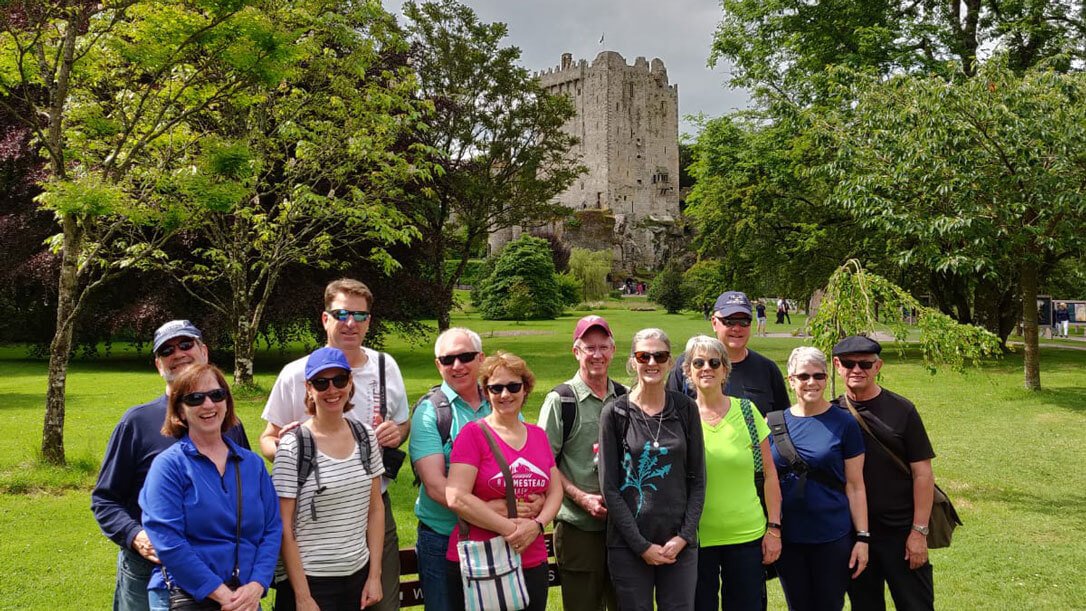 According to Irish folklore, anyone who kisses the Blarney Stone receives the ability to speak with eloquence, or The Gift of the Gab.

👑 Kings of the Castle: McCarthys

The legend of the Blarney Stone originated when Queen Elizabeth I attempted to take possession of the castle from Cormac McCarthy.

McCarthy always managed to talk his way out of the situation in a most flattering way to the Queen. She was said to be so irritated — but possibly somewhat charmed! — that McCarthy was full of 'Blarney'.

Hey, genealogy detective! Have you read our simple guide showing you How To Trace Irish Ancestry?

Once considered one of the strongest forts in Ireland, Carrigafoyle was a stronghold of the mighty O'Connor clan for over 400 years.

The 'Guardian of the Shannon' is located right on the banks of Ireland's longest river.

Carrigafoyle Castle itself rises to 26.4 metres with five floors, which are accessible to the public. The view from the battlements boasts stunning views of the River Shannon and its surrounding area.

👑 Kings of the Castle: O'Connors

The O'Connor clan were known to intercept boats on the River Shannon and take cargo as a toll. They continued their rule of Carrigafoyle Castle until the Desmond Wars in 1580. 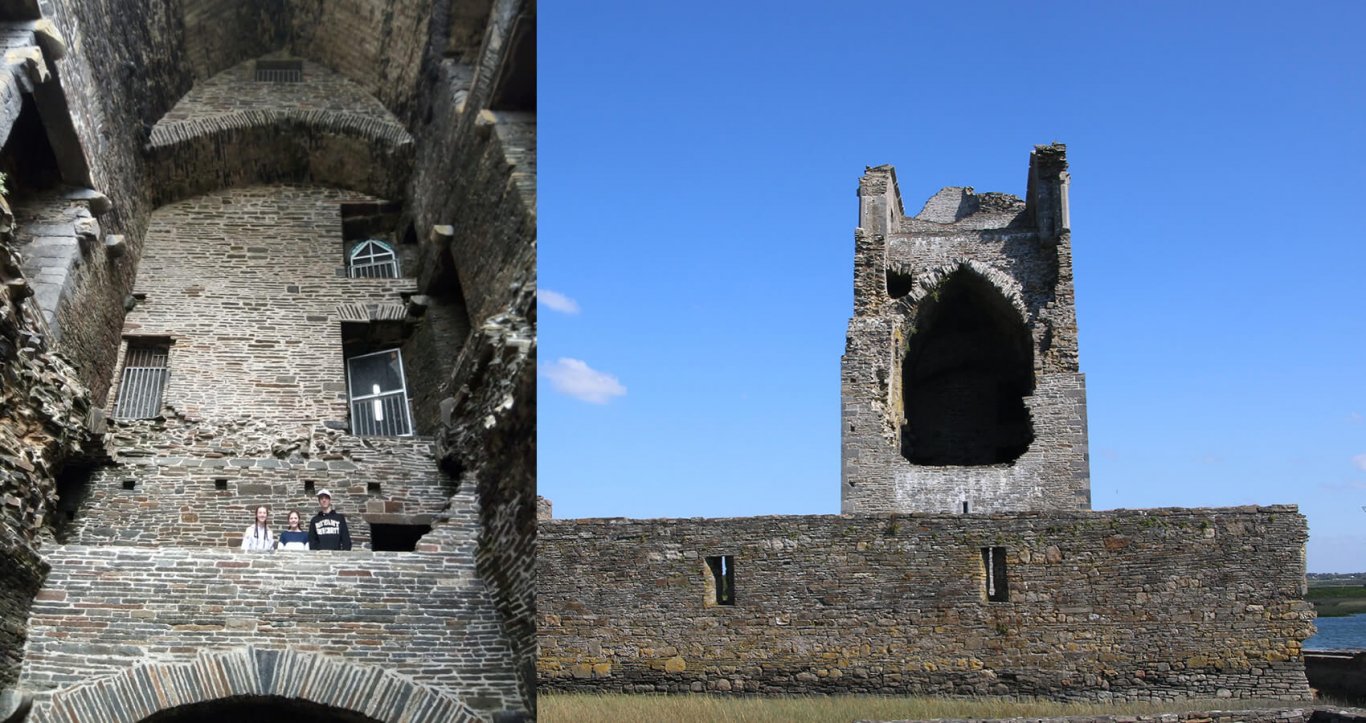 On Palm Sunday 1580, the walls of Carrigafoyle were breached by besieging English Crown forces and everyone inside were massacred. This included 19 Spanish soldiers who had come to the aid of the O'Connors. This lack of clemency was considered standard military practice at the time, as summed up in the phrase, 'No Quarter Asked for, none given'.

Don't forget, our small-group tours offer you the chance to stay in an Irish castle hotel!