Our own VagaGuide Bébhinn O'Malley recounts the extraordinary life of her ancestor: Irish pirate queen Granuaile. 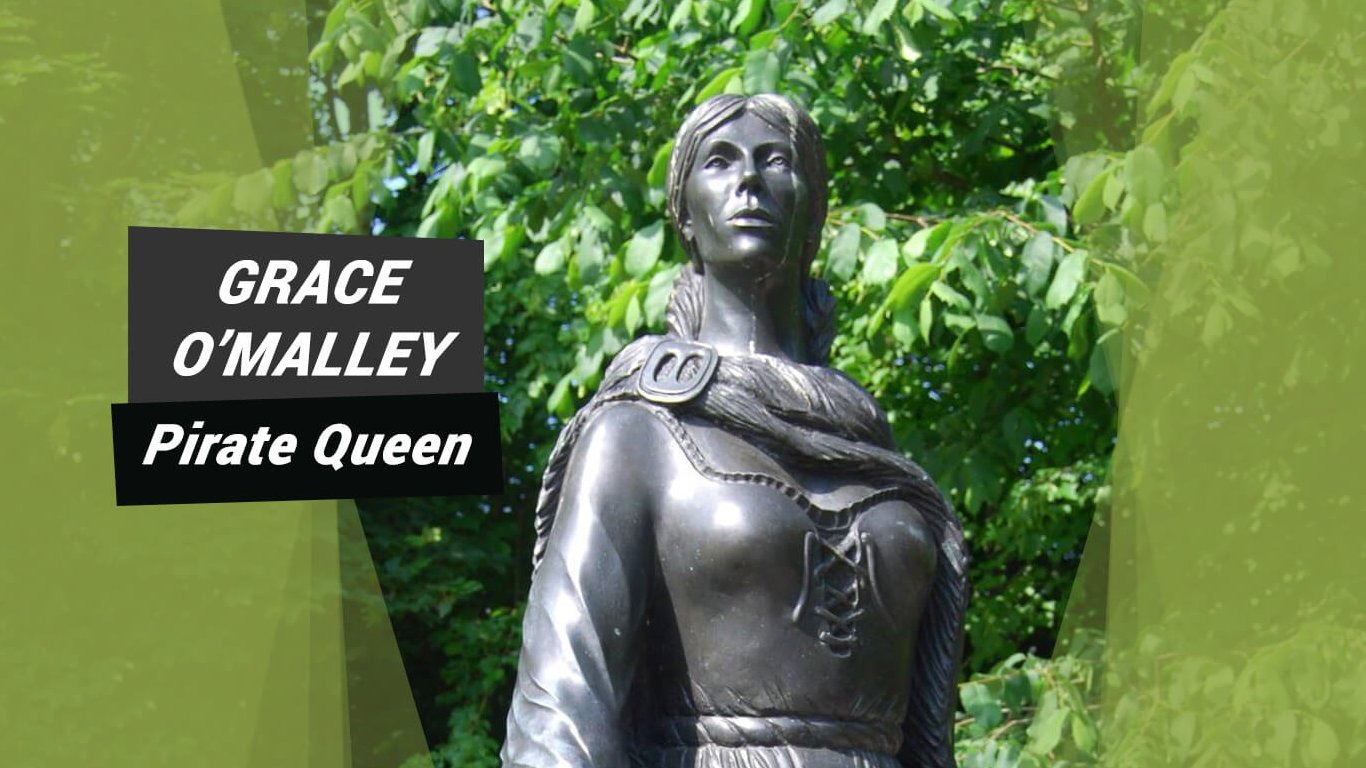 Grace O'Malley was a 16th century military leader, pirate and trader, famed for her exploits along the west coast of Ireland. She had a long maritime career, trading to ports as far away as the Mediterranean.

Ireland is known for its storytellers. And stories of Grace's life are a mix of both factual history and fanciful folklore. She was known by many names in her lifetime. Her actual name was Gráinne Ní Mháille (pronounced graw-nya nee waul-ye). The more commonly-used English version is Grace O'Malley. In Ireland, she's also commonly referred to as Granuaile.

During her eventful life Grace would marry twice, become an inmate in a Dublin prison and even meet Queen Elizabeth I of England. Reputedly fond of gambling, swearing and drinking, she became known by some as Grace of the Gamblers. Whatever the truth, hers was truly a life less ordinary.

Grace was born into a noble Gaelic family. Like myself, she was an O'Malley of Mayo.

The O'Malley clan were known as great seafarers. A 15th century poem portrayed us thus:

"They are lions of the sea,

Men acquainted with the land of Spain,

When seizing cattle from Kintyre, 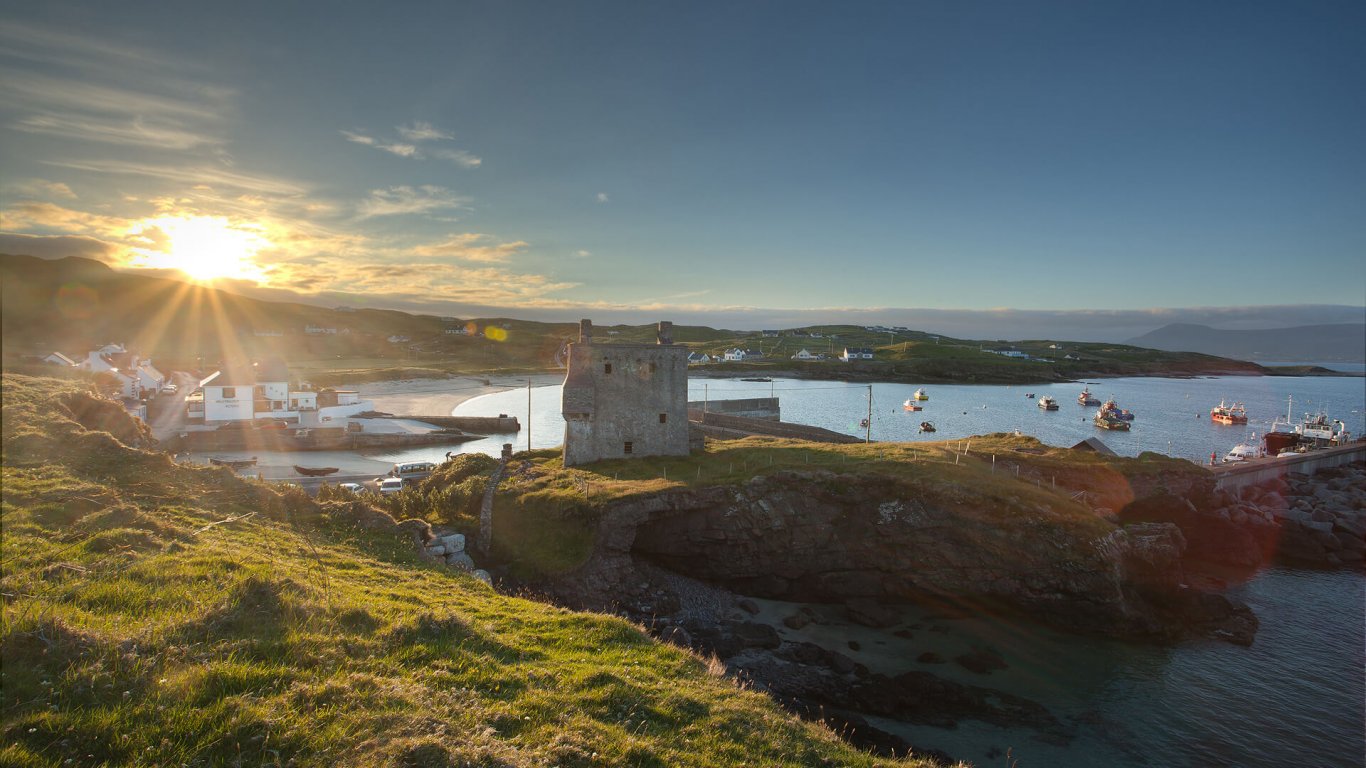 Grace based herself on Clare Island at the western edge of Clew Bay. Visitors to Clare Island today can still see the fortress she used there.

The Girl with the Cropped Hair

One of Grace O'Malley's nicknames was 'the girl with the cropped hair'.

The story goes that when Grace was a girl, she asked her father if she could go with him on a trading voyage. He refused because she was a girl. Undeterred, young Grace went away and cut off all her hair.

Grace's first husband was the chieftain Donal O'Flaherty. His nick name was 'Donal of the Battles', owing to his love of fighting.

At one point Donal captured a small castle on Lough Corrib in Galway from the neighbouring Joyce clan. Donal fought so fiercely and arrogantly in the battle he was given the name 'Donal the Cock', and the castle was named Cock's Castle. 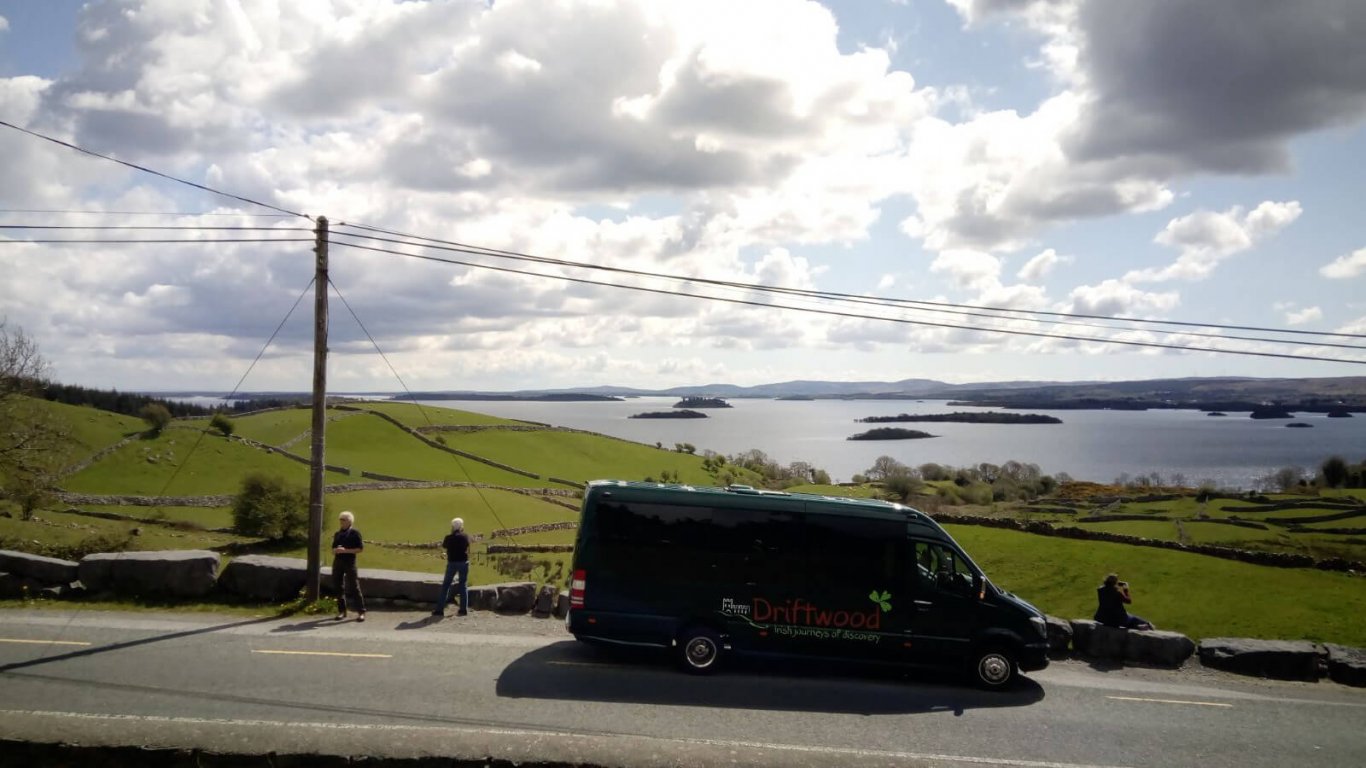 At a later point, the Joyces sought revenge and killed Donal while he was on a hunting trip. Assuming that Donal's castle would be easily recovered, the Joyces made their way to Lough Corrib. In the meantime, Grace had rallied an army. Leading her force, Grace fiercely defended the castle and drove away her enemies. The castle was renamed Hen's Castle in her honour.

Queen Elizabeth I ruled England during Grace O'Malley's lifetime. Attempting to bring Ireland under English control, she appointed Sir Richard Bingham as Governor of Connacht, the province where Grace lived.

Bingham was determined to bring Grace to heel. He confiscated her lands and livestock, and even imprisoned her on one occasion.

The final straw came when Bingham imprisoned Grace's youngest son, Tibbott, for treason. This was a crime punishable by death. Grace wrote to Queen Elizabeth to complain. 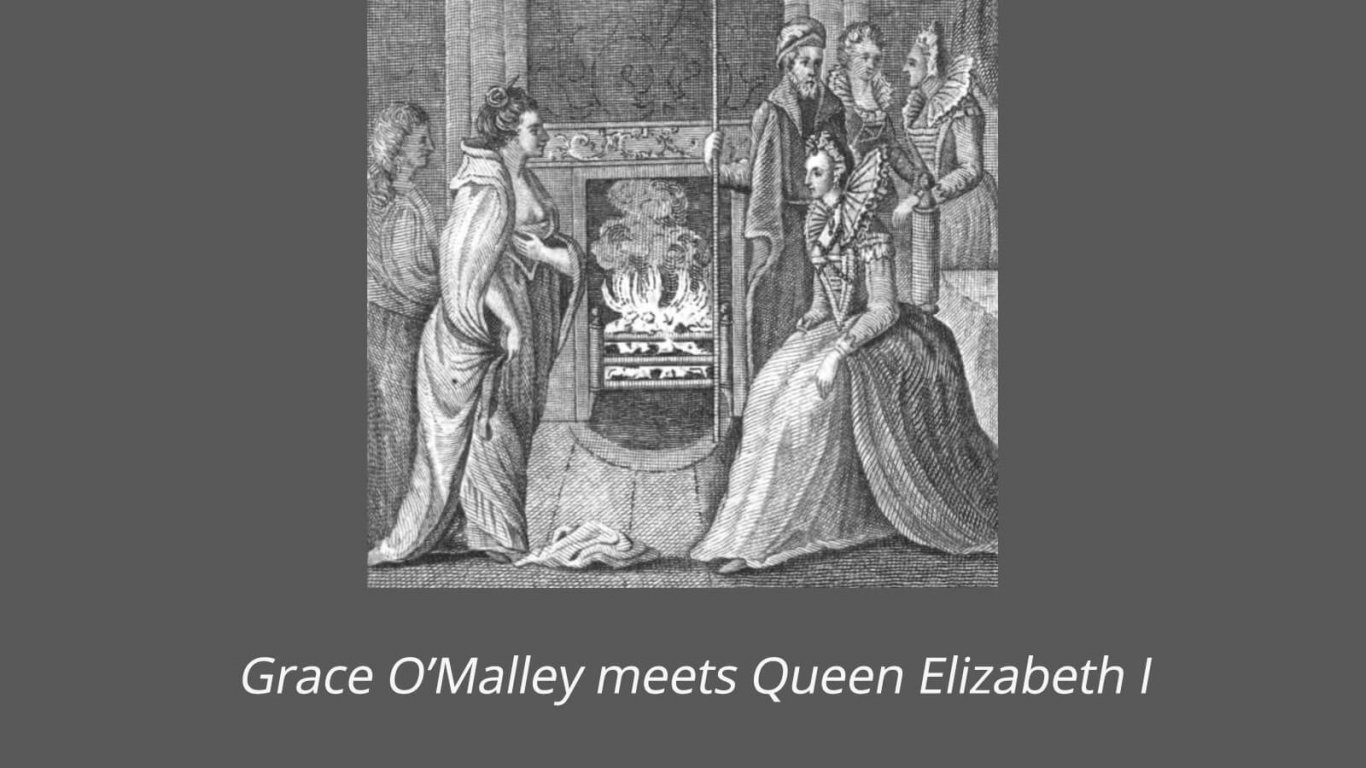 Receiving a favourable response, the Irish pirate queen sailed to London for a royal audience. What was actually said during the meeting of these two extraordinary leaders is unclear. Grace must have left a good impression. Queen Elizabeth ordered Bingham to return Tibbott safely, along with all lands and cattle.

On an official map commissioned after their meeting, Grace's name features alongside a list of otherwise all-male chieftains.

While returning from a voyage from England, Grace's fleet were forced to land at Howth near Dublin due to bad weather. It was customary at the time for Irish chieftains to offer food and shelter to fellow chieftains who were travelling through their lands. 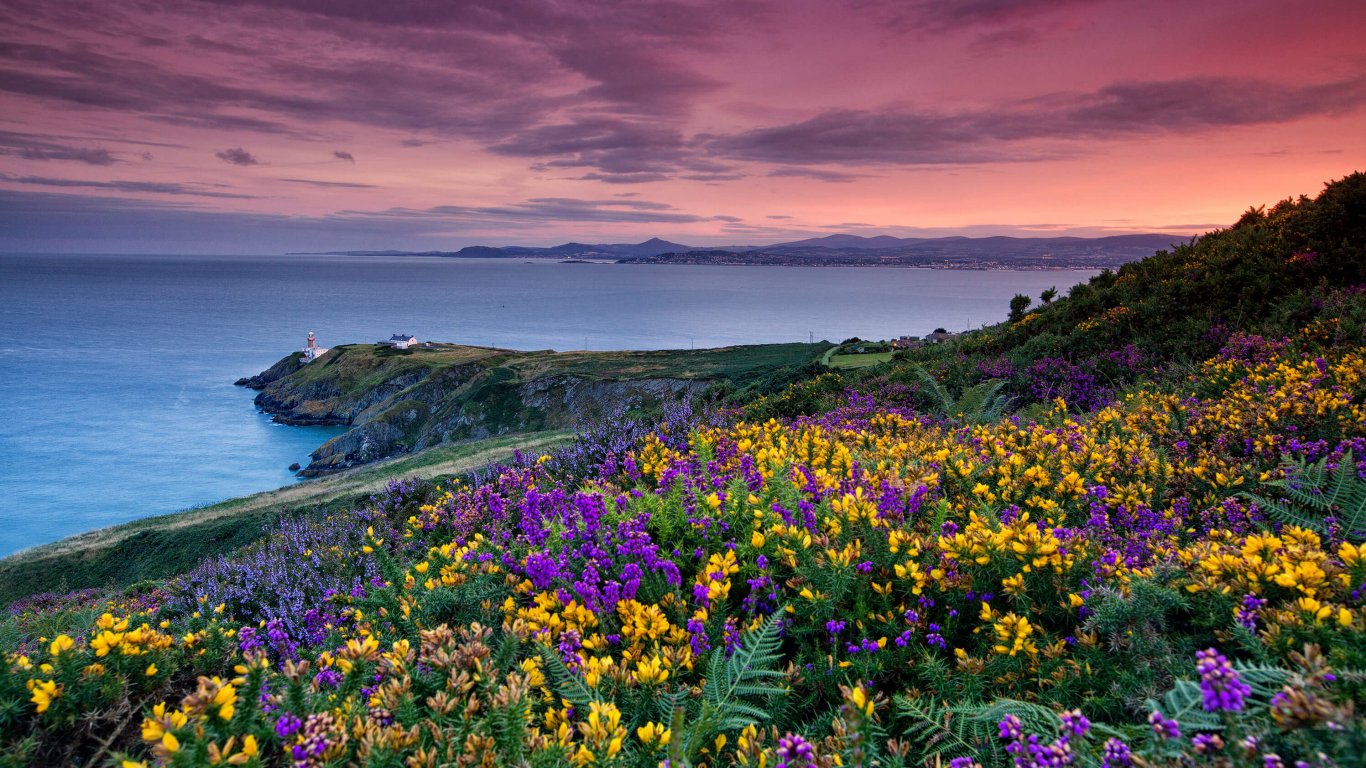 Howth, however, was located in an area under English rule. The local Lord of Howth did not extend the pirate queen any sort of welcome. In fact she was told that the Lord of the castle was dining and didn't wish to be disturbed!

Deeming this a high insult, Grace seized the Lord's young son and returned to Mayo with him as hostage. Distraught, Lord Howth went to Mayo to plead for his son's safe return. On arrival, he offered Grace a ransom which she refused. Instead, she wanted a promise that the gates of Howth Castle would never again be closed to anyone looking for food and shelter.

To this day, there is always an extra place set at the dinner table in Howth Castle. A ring was given to Grace as a pledge of agreement which still resides with her descendants.

"The most notorious woman on all the western coasts, a notable traitress and the nurse of all rebellions in the province for forty years.

Lord Deputy Sir Henry Sidney of Galway, who tried to have her hanged.

"Who thinketh herself no small lady"

"Take this from unconsecrated hands"

Grace O'Malley before she killed Turkish officers who had invaded her ship. This was alluding to her not having been "churched".

Image of Grace with Elizabeth I via Wikimedia Commons