Delve into the Wonders of Irish High Crosses

High crosses have become a symbol of Irelands ancient past. As the Roman Empire was crumbling in the 5th century, the Irish Celts were beginning to embrace Christianity. Putting their own stamp on the religion & in turn developing a distinctive artistic style. This style became known as insular art. A fusion of Celtic, Germanic, Anglo-Saxon & Christian art work. High cross developed as a prime example of this insular art work. 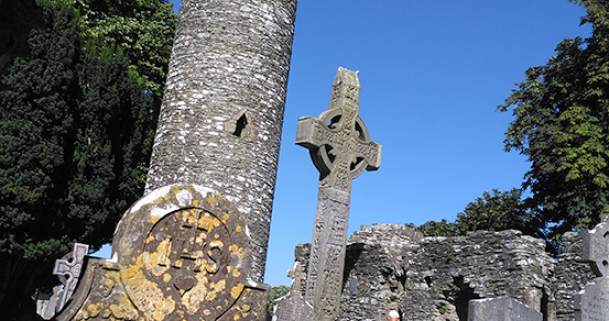 Some Interesting Facts about High Crosses

A popular spot on our tours is the monastery of Monasterboice. Founded in 520AD by St Buithe, a follower of St Patrick, it has become a prime example of an early Christian settlement. Two of it's most impressive monuments are undoubtedly the two high crosses: Muirdachs Cross & the West Cross.

Artistically and technically it is considered the finest high cross in Ireland. An impressive achievement for its day. It was all carved from one stone, apart from the base and cap. The fine detail on the cross is most evident from the least weathered spots under the arms of the cross. Remarkably although the cross contains a high level of detail, there is no sense of overcrowding.

The Eastern face of the cross has scenes from the Old Testament including, the fall of Adam of Eve and the murder of Adel; David & Goliath; Moses bringing water from the rock to the Israelites; The tree Magi bearing gifts to Mary & Jesus & the Last Judgement. The centre panel depicts the Last Judgement, with Christ in the centre holding a staff. To his right are those who have been saved and David playing a harp. To Christs left is the Devil with a three pronged trident and the damned whos faces are turned away from Christ.

The Western face depicts scenes from the New Testament. The bottom panel indicates the Abbot who the cross was built for: A prayer for Muirdach for whom the cross was made, with two cats curled up over the inscription. The shaft has scenes depicting the arrest of Christ; Doubting Thomas; and Christ giving the key to Peter and the book to Paul.

The theme of the cross appears to be redemption. A common enough theme across the Christian world at the time. Seeing as many believed the world was due to end in 1000AD with the second coming of Christ

At 6.5m in height it is Irelands highest tall cross. Although not as detailed as Muirdachs Cross, it contains more scenes than any other high cross. Unfortunately due to weathering only a dozen of the original 50 panels are distinguishable.

Similar to the Murdochs Cross the Eastern face depicts scenes from the Old Testament, such as: David killing a lion; David with Goliaths head; and David kneeling before Samuel.

Legible scenes on the Western side include: The Resurrection; the crowning with thorns; the Crucifixion; the baptism of Christ; Peter cutting off the guards ear at Gethhsemane; and the kiss of Judas.

If you are Interested in visiting Monasterboice to see the high crosses in person, check out our tour that visit there: 12 Day Vagabond Giant Irish Adventure, 7 Day Vagabond North by North West, 11 Day Driftwood Discover Ireland.