Ireland vs Scotland - Do You Have To Choose?

Understand these Celtic neighbours with our handy guide. Discover the differences and similarities between Ireland and Scotland, as well as the best way to explore both.

📏 Is Ireland Close To Scotland?

⛴️ How Do I Travel Between Ireland & Scotland?

💥 Is Ireland Better Than Scotland?

Since time immemorial, visitors to our shores have posed the following riddles.

That's why we've consulted the experts — ourselves — to answer them in-depth.

Read on, intrepid Vagabond, to solve the eternal Ireland vs Scotland riddle once and for all.

🤝 Similarities Between Ireland and Scotland

Because of their physical closeness, Ireland and Scotland share many characteristics...

👪 Family Names. You'll meet lots of O's, Mcs and Macs in both Ireland and Scotland.

⛴️ Shared Heritage. People from Ireland and Scotland have long migrated, intermarried and invaded each other (in both directions).

🏉 Rivalry With the English. Both Ireland and Scotland were dominated historically by English rulers. In the world of Scottish sport, England are referred to as 'the auld enemy'. Irish sports fans share this sentiment!

🙅‍♀️ Differences Between Ireland and Scotland

🗣️ Accents. You might not notice immediately, but Irish accents — particularly in the south — can sound very different to those of our Scottish cousins. People from Northern Ireland tend to share more cultural and linguistic traits with Scotland.

💷 Currency. Scotland, like Northern Ireland, is part of the UK. The currency in Scotland is the £ pound sterling. The Republic of Ireland uses the € euro currency.

🌳 Landscape Ireland is lusher and greener in general. Scotland has higher mountains and more extensive upland areas. The Scottish Highlands are colder, wilder and more treeless than most areas in Ireland (bar, perhaps, Connemara).

🌡️ Climate While Ireland and Scotland have a similar climate when compared to desert or tropical regions, Scotland tends to receive more extreme weather. Ireland rarely experiences serious snowfall but this is not the case in Scotland. The coastal areas in southern Ireland are frost-free all year round and have a much milder climate than Scotland.

🚐 Us! Only Ireland can boast Vagabond & Driftwood tours!

Just where is Ireland in relation to Scotland?

Are they located close to each other?

The answer is a resounding YES!

Are they the same landmass?

Ireland is an island. Scotland is the northern part of the island of Britain.

Having said that, the closest points between Ireland and Scotland are only 12 miles (19km) apart.

⛴️ How Do I Travel From Ireland To Scotland?

That 12 miles distance between Ireland and Scotland is ocean though, not land.

The Giant's Causeway has long since sunk under the waves.

So if you want to tour Ireland and Scotland, you'll have to jump on a boat or a plane.

The good news is that the travel times are relatively quick.

You can easily take a 2.5 hour ferry ride between Northern Ireland and Scotland.

Or you could jump on a short-haul flight from Dublin (Ireland) to Glasgow (Scotland). Once you have cleared security, the flight takes less than 1 hour.

💥 The Crux: Is Ireland Better Than Scotland?

Yes, we admit it.

We are possibly — ever-so-slightly — biased.

We reckon Ireland wins the eternal Scotland Vs Ireland debate on the following points...

🍺 The Beer. Nothing compares to iconic Irish stout! Guinness really does taste a million times better in Ireland. Scottish beer is a by-product of the cattle-feed manufacturing process.

🎸 The Rockers: As much as we loved the Bay City Rollers and The Proclaimers back in the 70s and 80s, any country on earth would find it hard to rival Ireland's musical exports.

🧚 The Mythical Creatures. Ireland has leprechauns, legendary warriors, mischievous fairies and gold at the end of the rainbow.

Scotland has blurry monsters in lakes.

😇 The Saints. Our patron saint, Patrick, is loved around the world. He banished snakes, invented Christmas and adopted the shamrock as a symbol of Ireland.

Scotland's Saint Andrew is also the patron of gout and sore throats.

Maybe related to all the deep-fried pizza?!

🍻 The Pubs. Can you go to a Scottish pub in Azerbaijan, Ulaanbaatar or Zambia? Would you want to?

The Irish pub is the international benchmark for bars.

We think there should be a Nobel Prize for pubs. Ireland would win every year!

😏 The Proof... A Scotsman Wrote This!

What's the proof that Ireland is a better choice than Scotland for your tour?

Well, this blog post was written by a native-born Scotsman.

I, Rob Rankin, just like Saint Patrick himself, have been almost entirely converted to Irishness.

It was blessedly early in life that I met my Irish wife, Amy, and turned towards the true Irish path

Then, back in 2002, we founded Vagabond & Driftwood Tours.

We've made it our mission for over 20 years to show the magic of Ireland to the world.

...And also that we are just better than my homeland, Scotland.

So there you have it, Ireland is the clear winner in our extremely balanced and well-researched Scotland Vs Ireland debate.

You know now whether to choose Scotland or Ireland for your next trip.

If you are adamant that you'd still like to visit Scotland, it is possible to combine Ireland and Scotland tours.

The reviews we hear back from our own guests who have used Best Scottish Tours are fantastic.

Just like us, they have been in business for over 20 years.

The team at Best Scottish Tours deliver personalised customer service with similarly high standards to ourselves.

If you’re interested in combining Ireland and Scotland Tours, we heartily recommend that you read a little more about Best Scottish Tours on their website: www.best-scottish-tours.co.uk 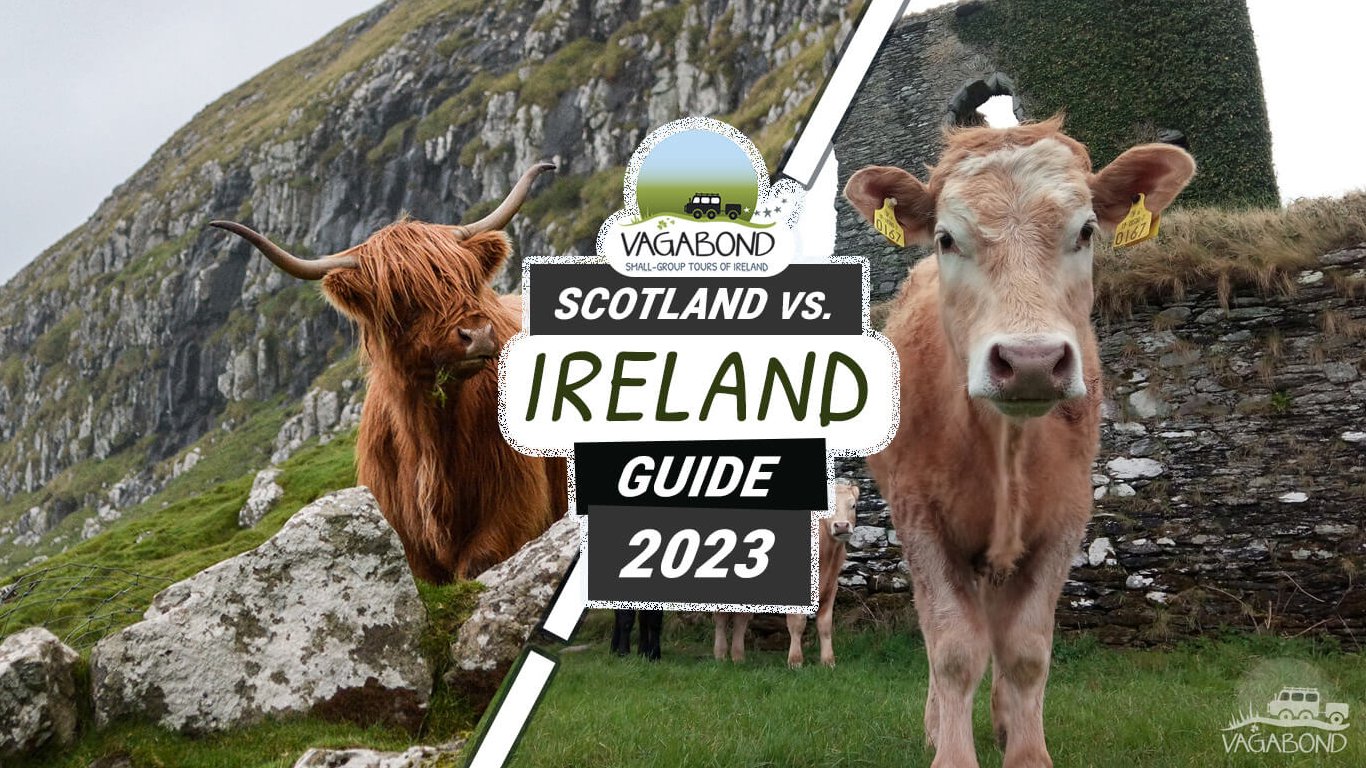 Photo by Eric Welch on Unsplash