The Celtic Festival of The Summer Solstice

During Celtic pagan times, life was governed by the movements of the sun. Their calendar was based around the Equinoxes and Solstices, as well as the several dates in between. The Gregorian calendar, adopted in the last few centuries, ensured Easter would always fall in late Spring, but the Celtic calendar celebrated the movements of the sun, as they realised the importance of it for their very survival.

What is the Summer Solstice?

The Summer Solstice occurs in the Northern hemisphere, when the axial tilt of the earth is at its closest point to the sun, making it the longest day of the year. It is the turning point of the year when the sunshines longest. In Ireland, that date is the 21st of June. The summer solstice was one of 8 Celtic festivals celebrated throughout the year.

Find out more about Summer in Ireland here.

The Importance of the Summer Solstice to the Celts

In order to banish any evil spirits that might harm their crops, the Celts would light bonfires, where they would sing, dance and feast. It was also customary for lovers to clasp hands and jump over bonfires. This was thought to bring luck to their relationship. Some believed the higher the lovers jumped, the higher their crops would grow.

Bonfires were lit on top of hills, at crossroads or in large openings. It was a time of great merriment. 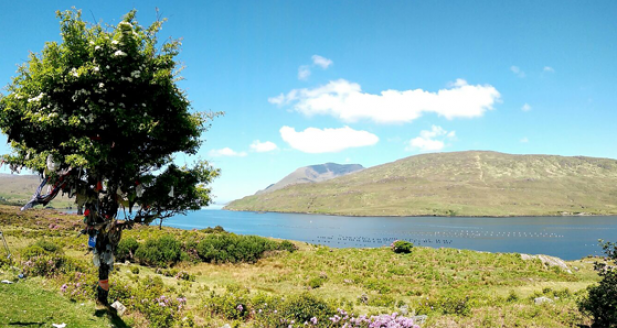 What is the Celtic Name for Summer Solstice?

The Celtic druid name for the summer solstice is Alban Hefin, which means the The Light of the Shore or Light of Summer. The shore refers to the coast, an area where the worlds of land, water and sky meet - as Druidry valued places of in-between worlds. The light of the summer' refers to how the sunlight is cast as wide as it will ever be.

Crowning of the Oak King

In Neo-Pagan traditions, there is the legend of the Oak King versus the Holly King. On the 21st of June - the Oak King is at his strongest. Gradually his power weakens, until the Winter Solstice of 21st of December when the Holly King regains power again.

At the exact opposite end of the year, on the 21st of December is the Winter Solstice. Something magical happens on this day - the Winter Solstice. In the passage tomb of Newgrange, Co Meath, the rising sunlight creeps up the passage, illuminating the whole chamber. Older than Stonehenge and the Great Pyramids of Giza, this day played a significant role in the life of the Neolithic farmers who built it over 5000 years ago.

The Best Cities in Ireland