Cliffs of Moher and The Burren

The Cliffs of Moher are undoubtedly the biggest attraction in the Burren. While the cliffs are spectacular and worth a visit, the Burren has so much more to offer.

Quick Links To The Cliffs of Moher and The Burren

😮 The Famous Cliffs of Moher

🤔 What and Where Is The Burren?

🐄 How Was The Burren Formed?

🌸 The Rare Flora of The Burren

🎻 THE Place For Traditional Irish Music

"There aren't enough trees from which to hang a man, nor water to drown a man nor soil to bury a man."

General Ludlow, one of Oliver Cromwell's officers, about the Burren.

Unlike us, the Cromwellian crusaders may have missed a point on the beauty of the Burren.

We have a deep love for the Cliffs of Moher and the Burren.

Read on to find out why this area of north county Clare is just the most amazing place...

😮 The Famous Cliffs of Moher

On the top of many peoples lists when they visit Ireland is the Cliffs of Moher.

Standing at 702 feet and spanning 8 miles, it is the second most popular tourist attraction in Ireland (the Guinness Storehouse is number one, if you were wondering). 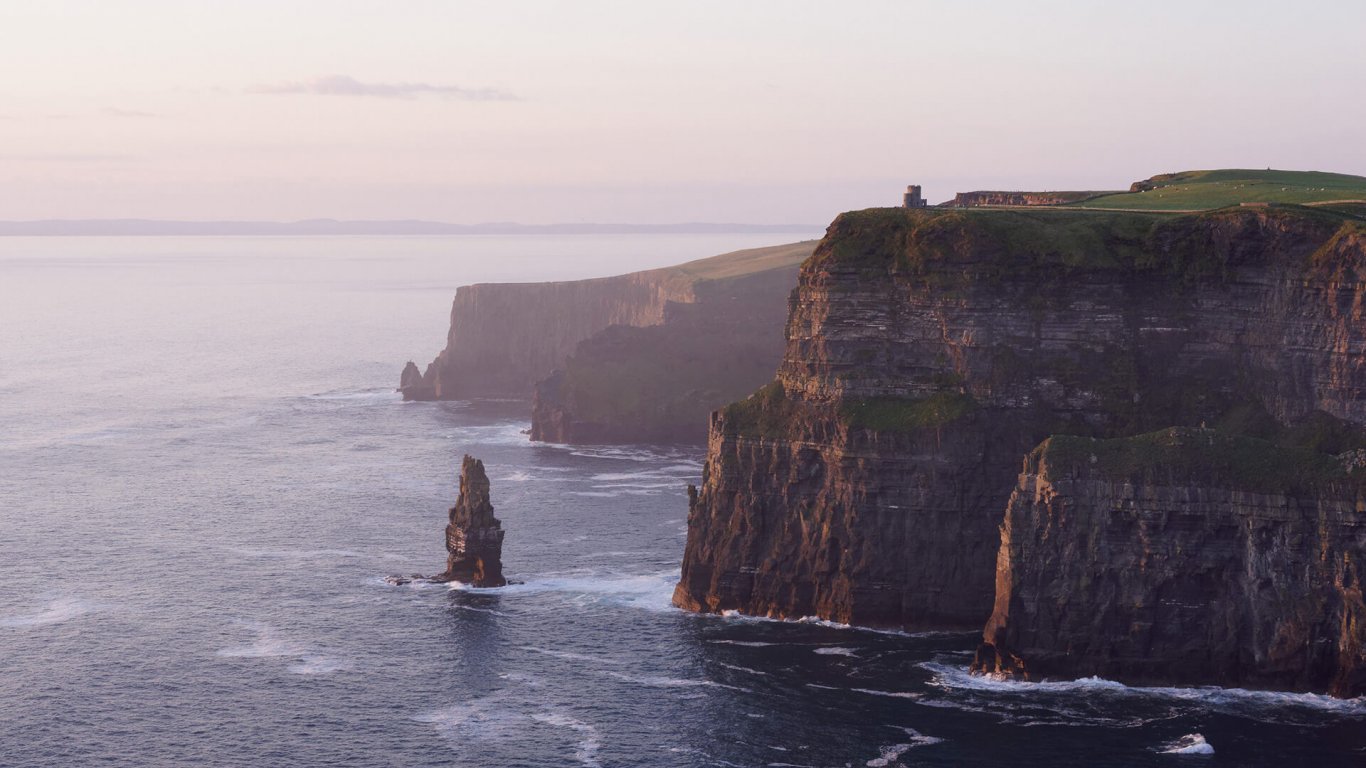 On a clear day you can look at and see the Aran islands and Galway Bay, with the mountains of the Maum Turks and Twelve Bens to the north in Connemara.

On a really clear day you might even be able to see as far south as the Dingle Peninsula in Kerry.

Trust us, such views are best seen to be believed.

🤔 What and Where Is The Burren?

The Burren is located in the northern portion of county Clare, in the west of Ireland.

The nearest towns are Ballyvaughan, Kinvara and Lisdoonvarna. 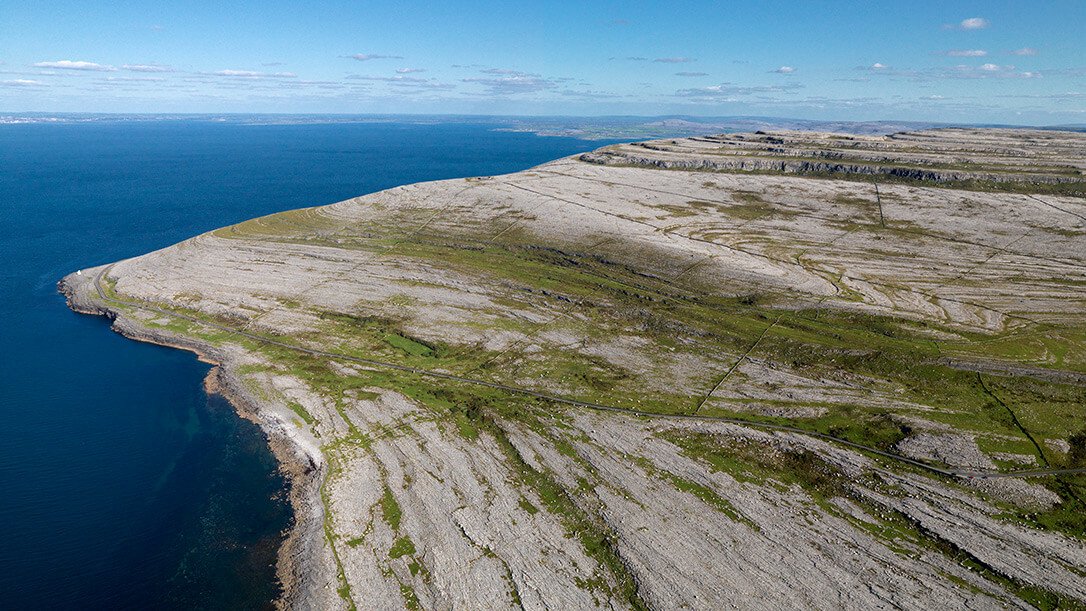 It's a unique-looking area of limestone karst. Unlike much of the rest of Ireland, there are very few trees here. Certainly not 40 shades of green!

In total, this amazing lunar landscape covers over one hundred square miles of Clare.

The mountains and headlands are bare and rocky. The Atlantic Ocean borders the Burren on two sides, making the scenery even more dramatic.

One first-time visitor with Vagabond Tours commented that the Burren looks "like a land of giants".

🐄 How Was The Burren Formed?

The Irish for Burren is Boireann, meaning big rock. In some ways that is exactly what it is. 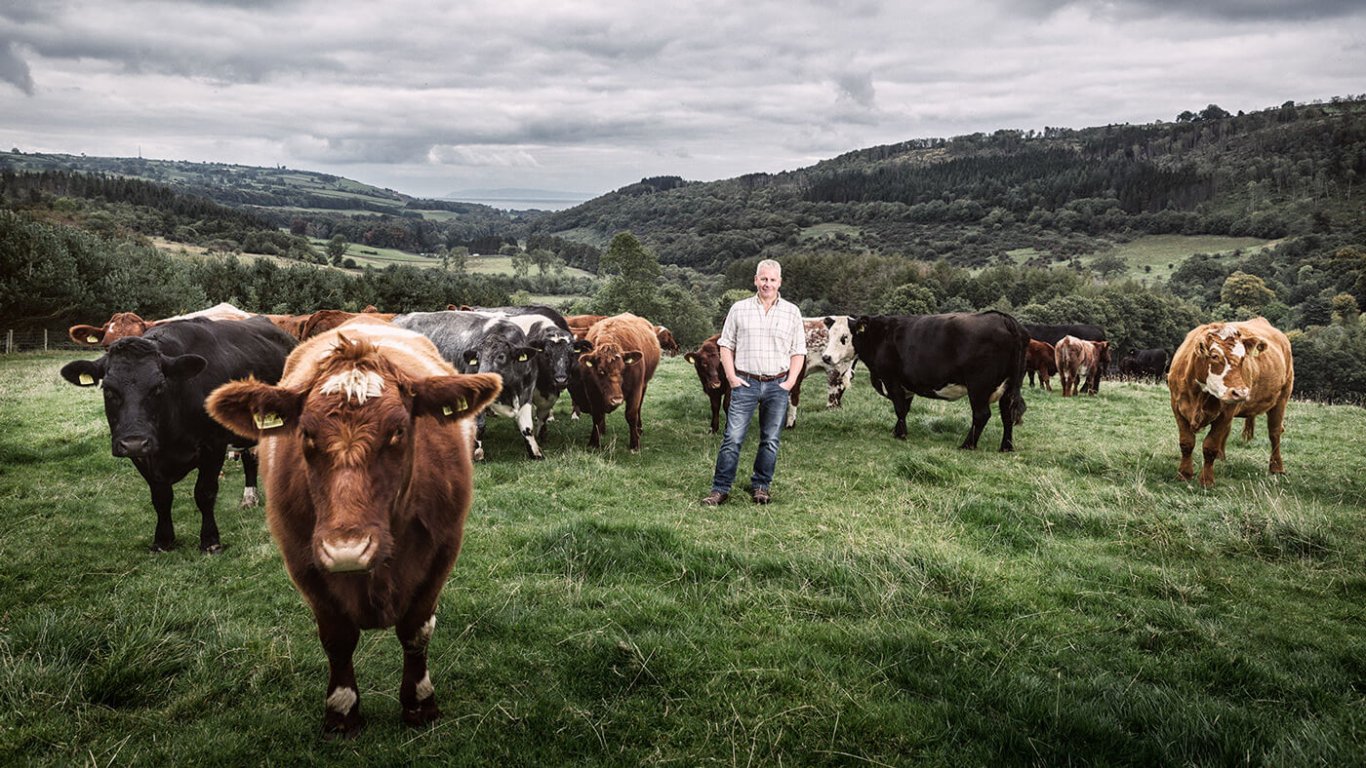 Millennia of animal grazing has worn back the soil to expose the bare rock below. This limestone rock in turn has been eroded away, all of which gives the amazing effect that can be seen today.

If you're looking to explore this amazing place, the coast road is one of the best ways to do so. With views of the Atlantic on one side and the Burren on the other what's not to like?

The Burren is a rock lover's paradise. 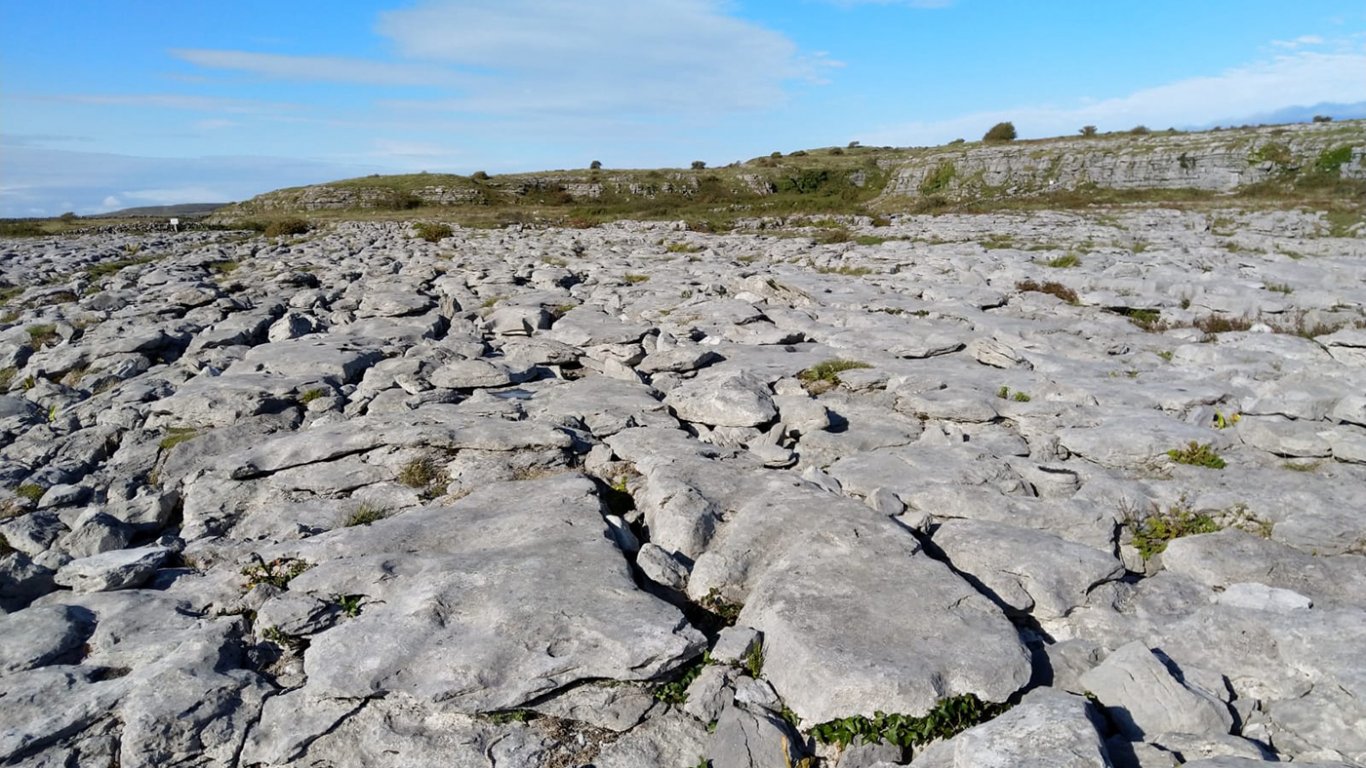 This limestone is an organic sedimentary rock laid down millions of years ago in a shallow warm sea.

Not only that, but the dry stone walls constructed over centuries by local farmers add yet another amazing stone sculpture to your visit.

🌸 The Rare Flora of The Burren

With all that rock, you might expect nothing to grow and blossom here. 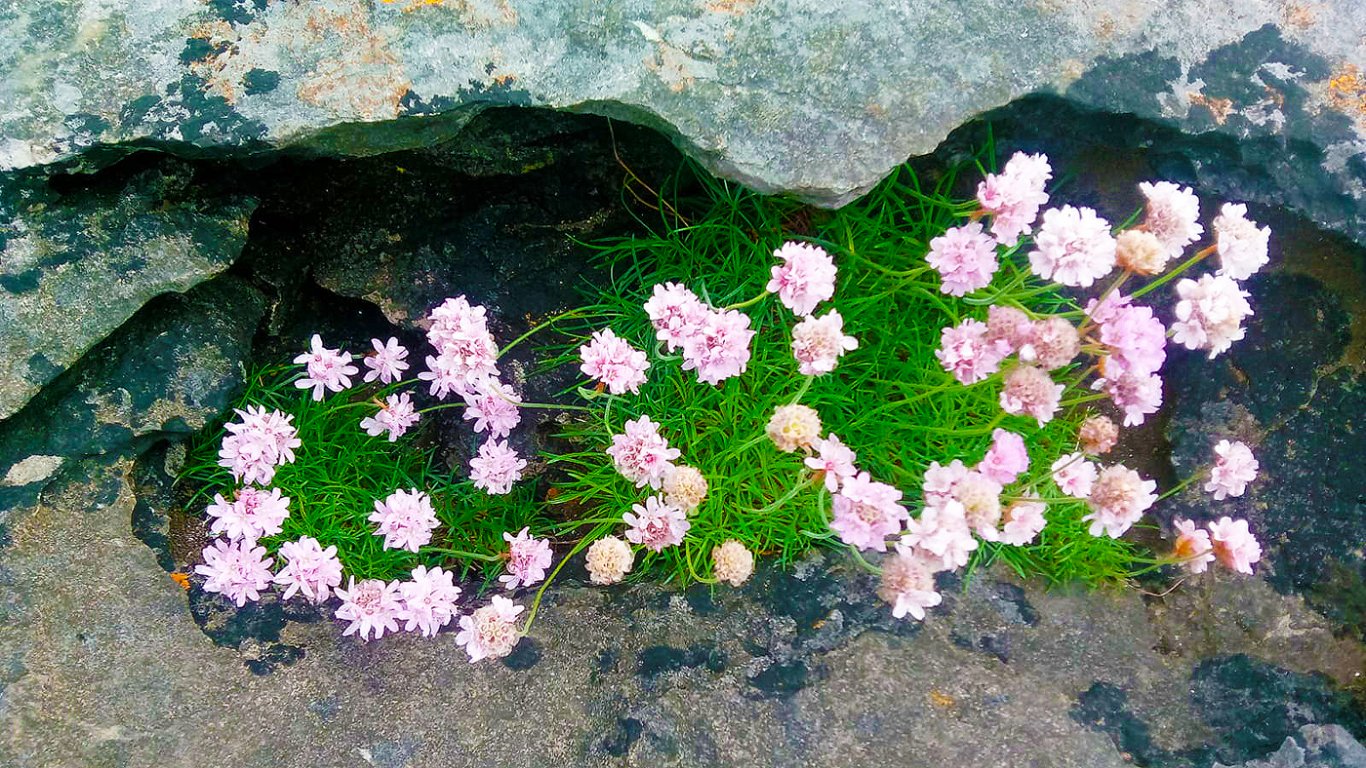 Between the folds of limestone, life is sprouting out. A unique microclimate creates the conditions where Arctic and alpine plants can grow alongside Mediterranean ones.

So between your rock hopping, make sure to keep your eyes peeled for beauties such as bright blue gentians peaking out.

Check up on wildflowers from the Burren and elsewhere in Ireland

The Burren was first inhabited during the Neolithic early Stone Age era, over 5,000 years ago.

Very little is know of these early farmers. Their language, culture and way of life remain a mystery. 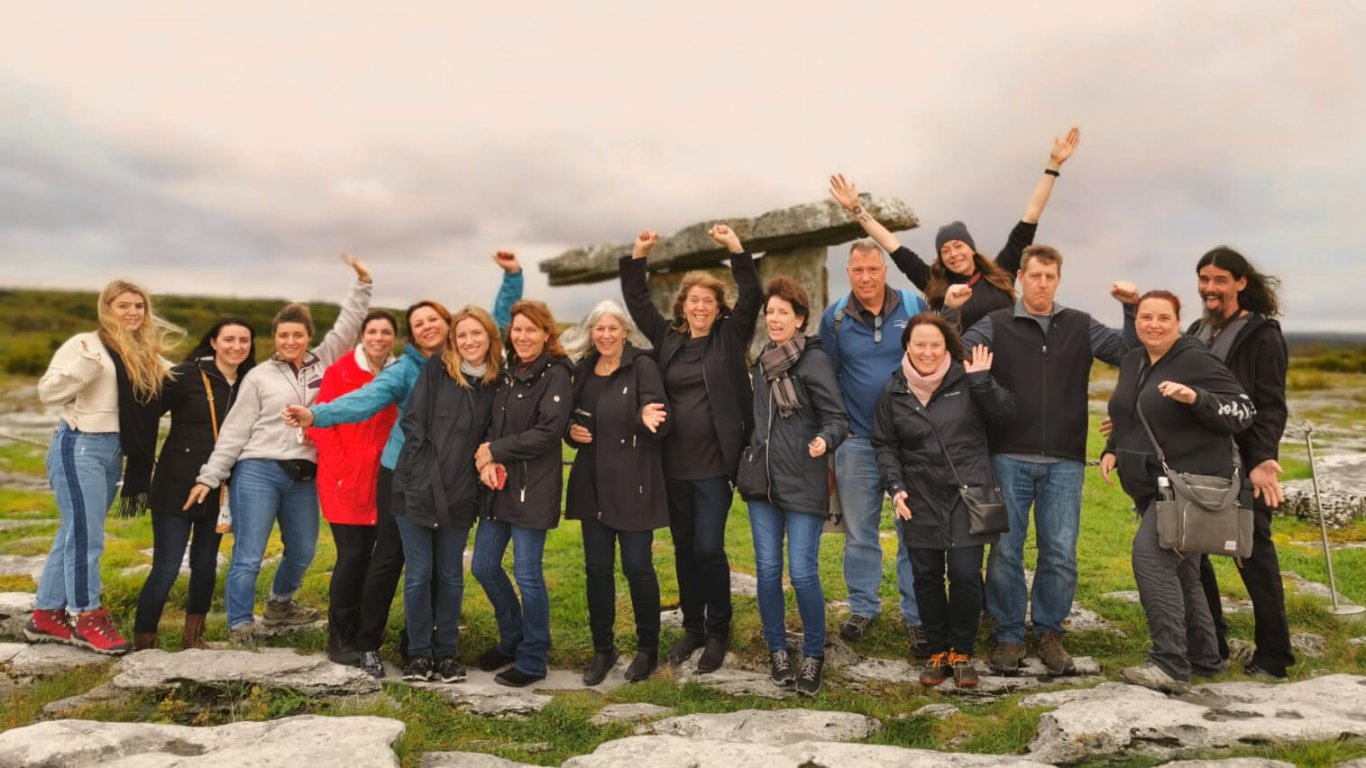 One of the only established facts is that they built impressive graves for their dead. The portal dolmen of Poulnabrone is without doubt the best example of these tombs in The Burren.

Built between 4,200 BC and 2,900 BC, it is a marvel that, in a time before heavy machinery, humans were able to erect such large boulders into place.

🎻 THE Place For Traditional Irish Music

Traditional Irish music is deeply ingrained in the culture of Clare.

Most towns you will visit in Clare will have a pub (or several) known for their music.

Traditional music festivals run from February right through until October in the county.

So if you're into the 'Ceol agus Craic' — Irish for music and fun — Clare is the place to be.

If you would like to visit the Burren and the Cliffs of Moher, be sure to check out our tours below or email us on enquiries@vagabond.ie.