Scenic Places in Ireland You Must Visit 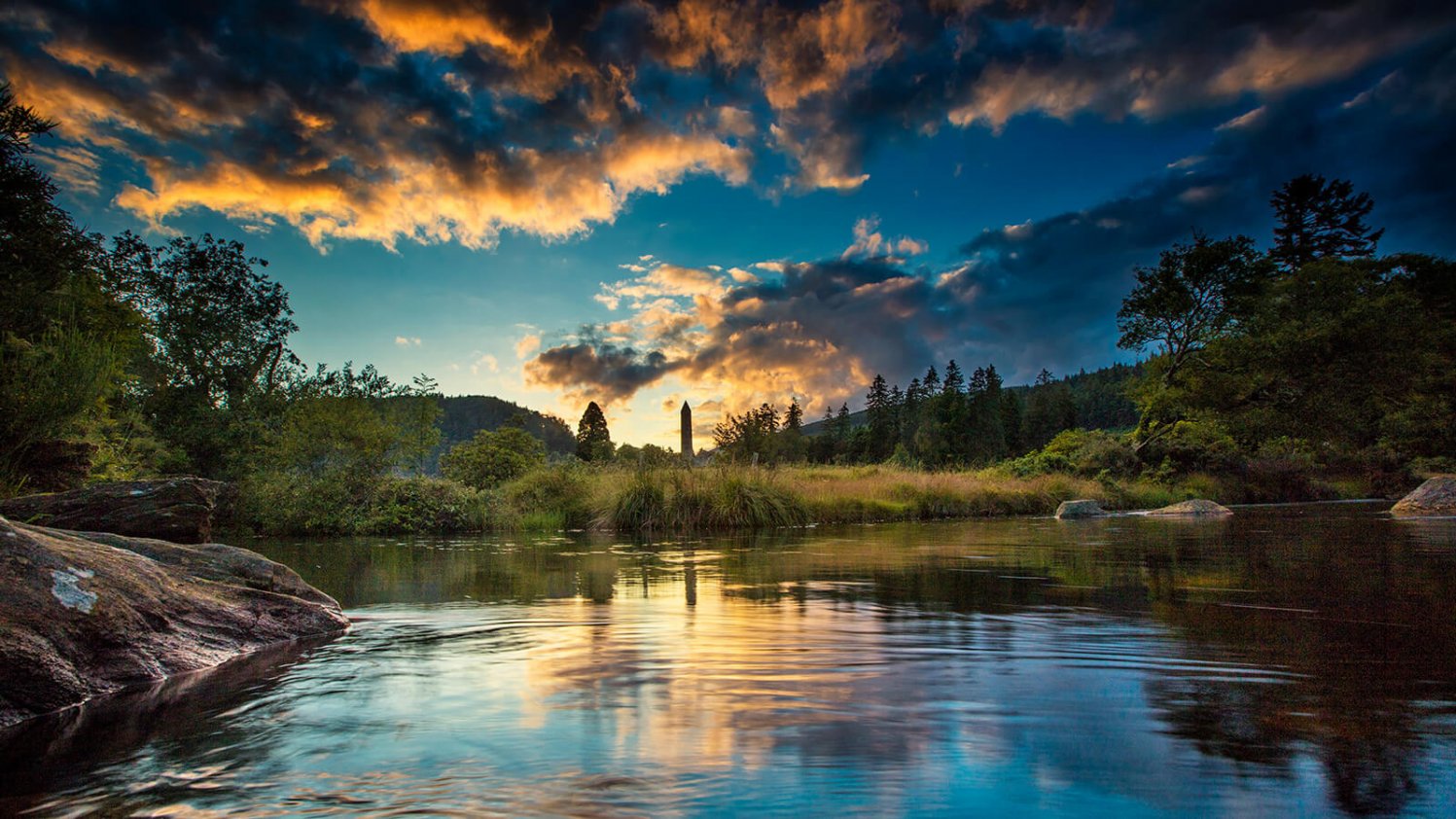 Youll feel far from civilisation as you cross the Wicklow Mountains, only one hour from Dublin.

This is home to the 6th century monastic city of Glendalough, stunningly located in a steep glaciated valley. 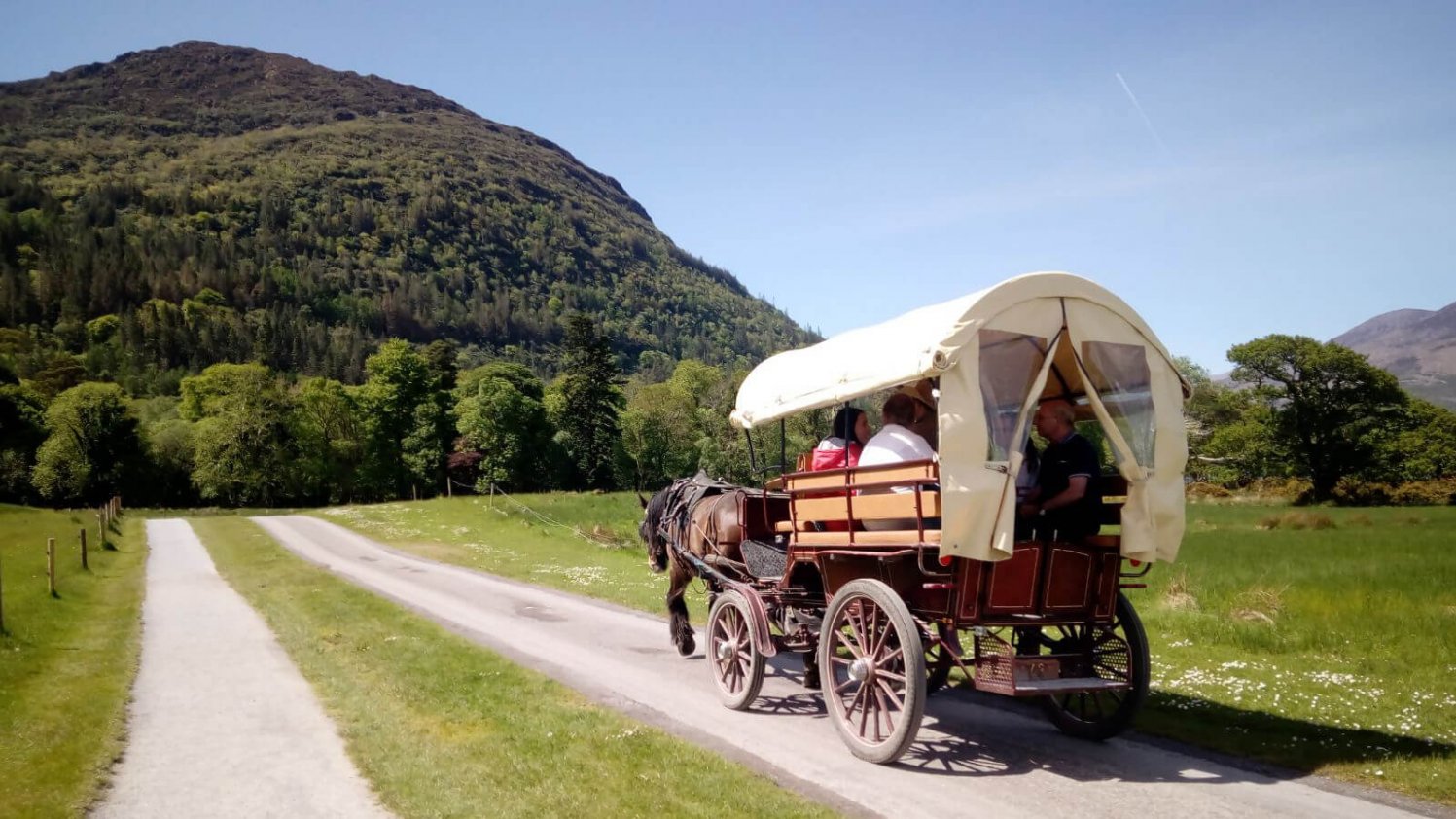 Nestled in the foothills of the Ireland's highest mountain range is Killarney National Park.

Explore stately Muckross House and Gardens. Wander through the ruined halls of Muckross Abbey. At its centre stands an 800 year old yew tree, spiralling toward the heavens.

Stroll to the magical Torc waterfall. Visit historic Ross Castle on the banks of Lough Leane. Or simply gaze out on the expanse of lakes and mountains that surround you. Heaven. 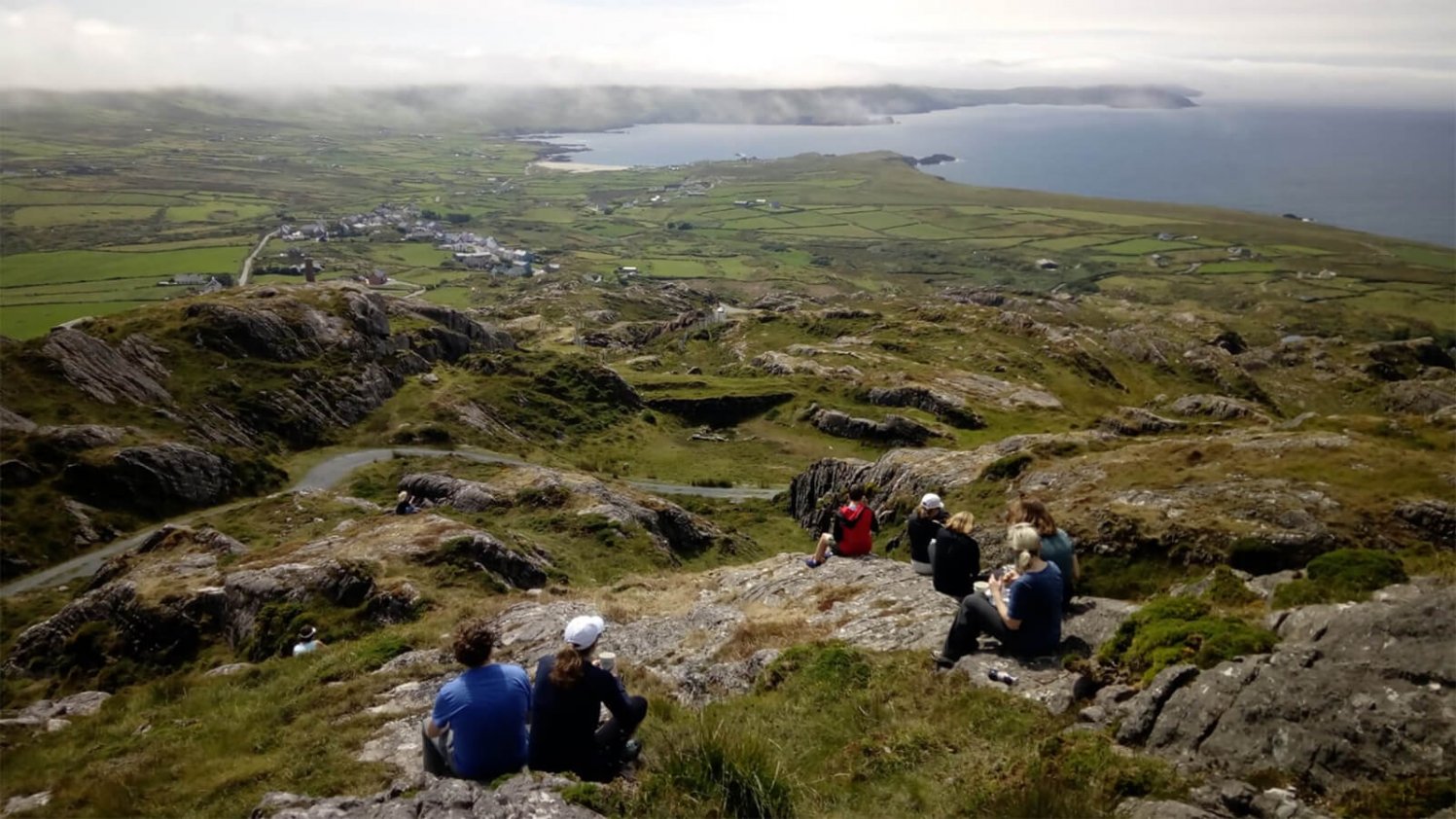 One of our favourite pastimes here at Vagabond Tours is dancing around megalithic stone circles. And one of the very best is Uragh on the Beara Peninsula.

Of the four southwestern peninsulas we visit, Beara is the wildest. And nowhere sums it up better than the Healy Pass, undulating over the Caha mountains. The views do not disappoint.

DEFINITELY one of the most scenic places in Ireland.

The Ring of Kerry

The Ring of Kerry also features picturesque small towns such as Kenmare, Portmagee and Killorglin.

Another stunning peninsula in southwest Ireland and an enduring Vagabond guest favourite.

Many come for the picturesque town of Dingle. Craic (fun), ceol (music) and a fantastic selection of Irish cuisine. This charming little town has it all.

But the rest of the Dingle peninsula itself has much to offer. Rugged beauty and knife edge drops are guaranteed on the route around Slea Head, Europes westernmost point. 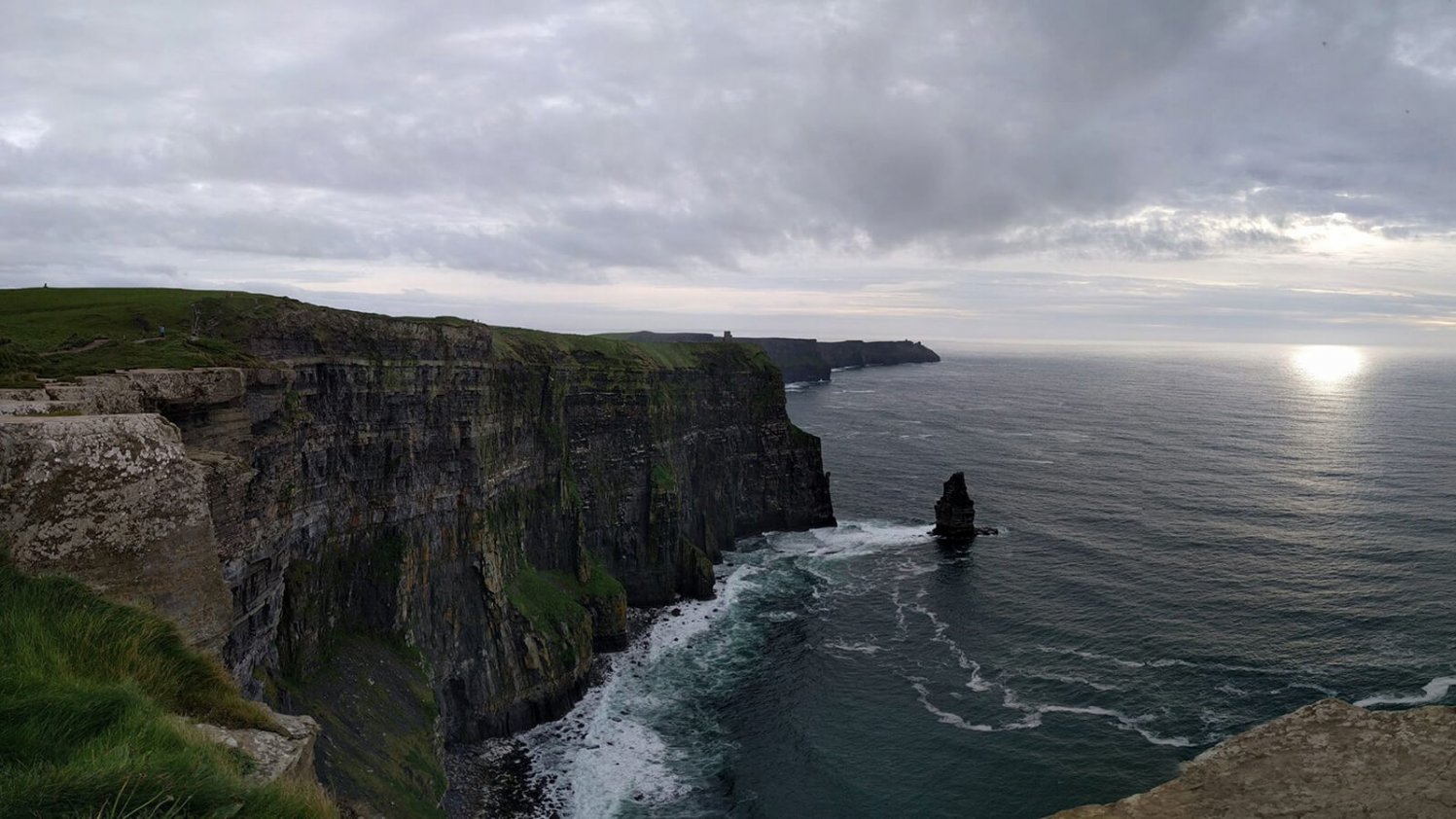 One of the most famous scenic places in Ireland. With at least 1.5 million visitors annually, the Cliffs of Moher are a wildly popular scenic tourist site.

They live up to the hype. On a clear day, you can look out across Galway Bay to the Aran Islands, with the mountain ranges of Connemara in the background. Stunning.

Of course, we do the Cliffs of Moher the Vagabond way. Hiking in from the south, we see all angles of this 214 metre (702 feet) high, 8km (5 miles) long natural wonder. But we also avoid the crowds! 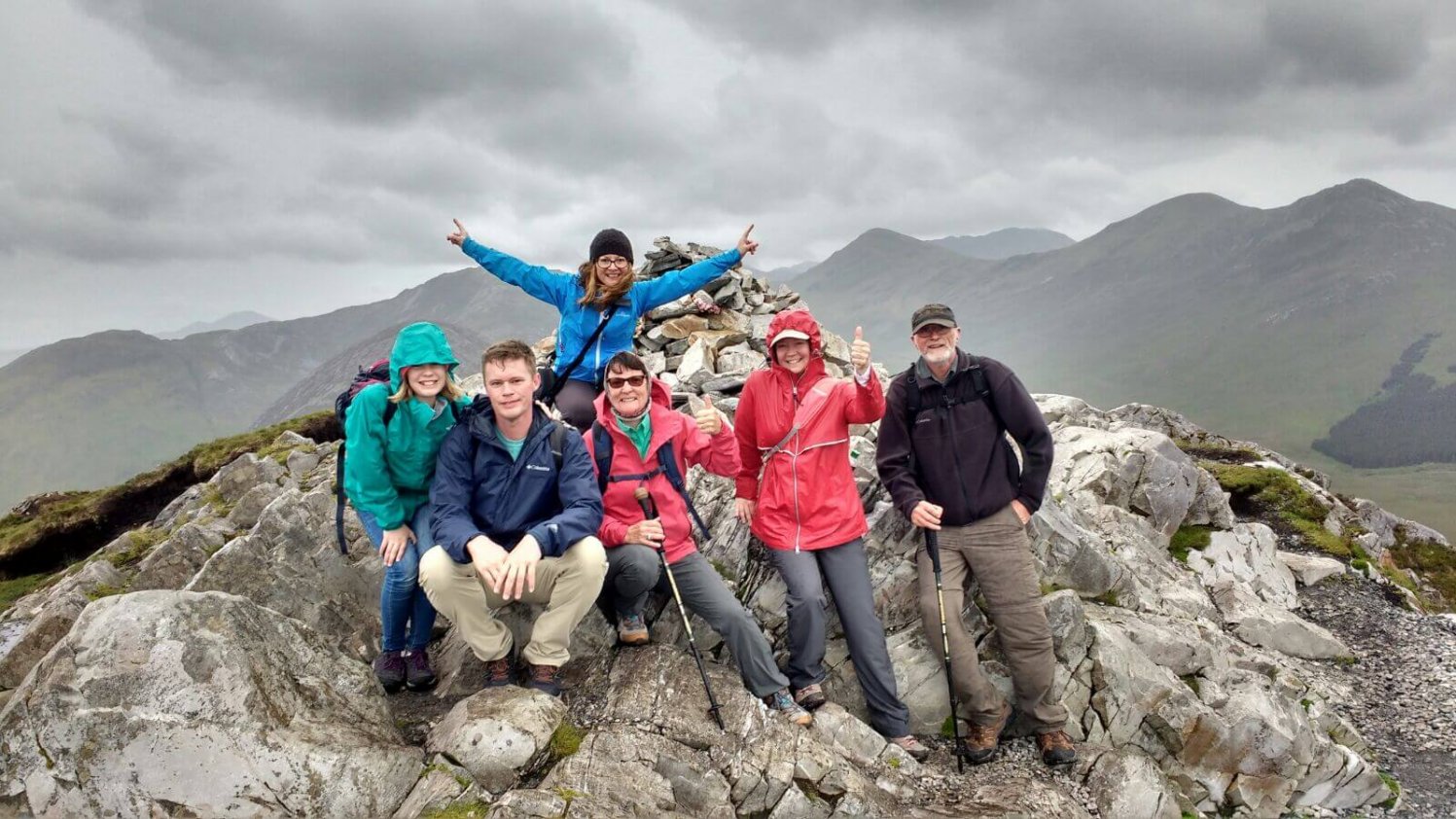 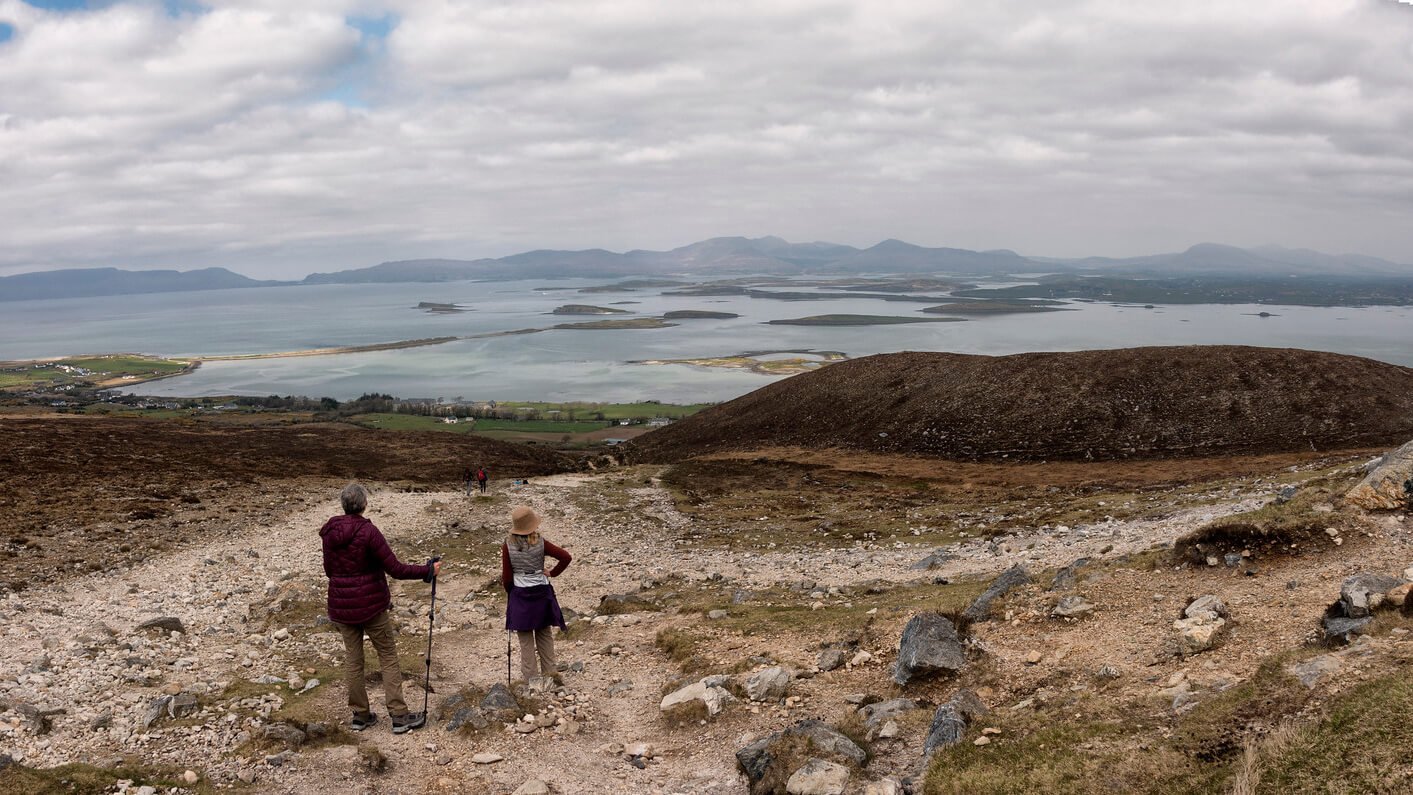 Got some spare time? There are 365 islands in Clew Bay - one to visit every day of the year!

One of the most scenic places in Ireland, Clew Bay is surrounded by other amazing sights. Clare Island was the home to the pirate queen Grace O'Malley. To the north, you'll find Mulranny and Achill Island. To the south, the holy mountain of Croagh Patrick. 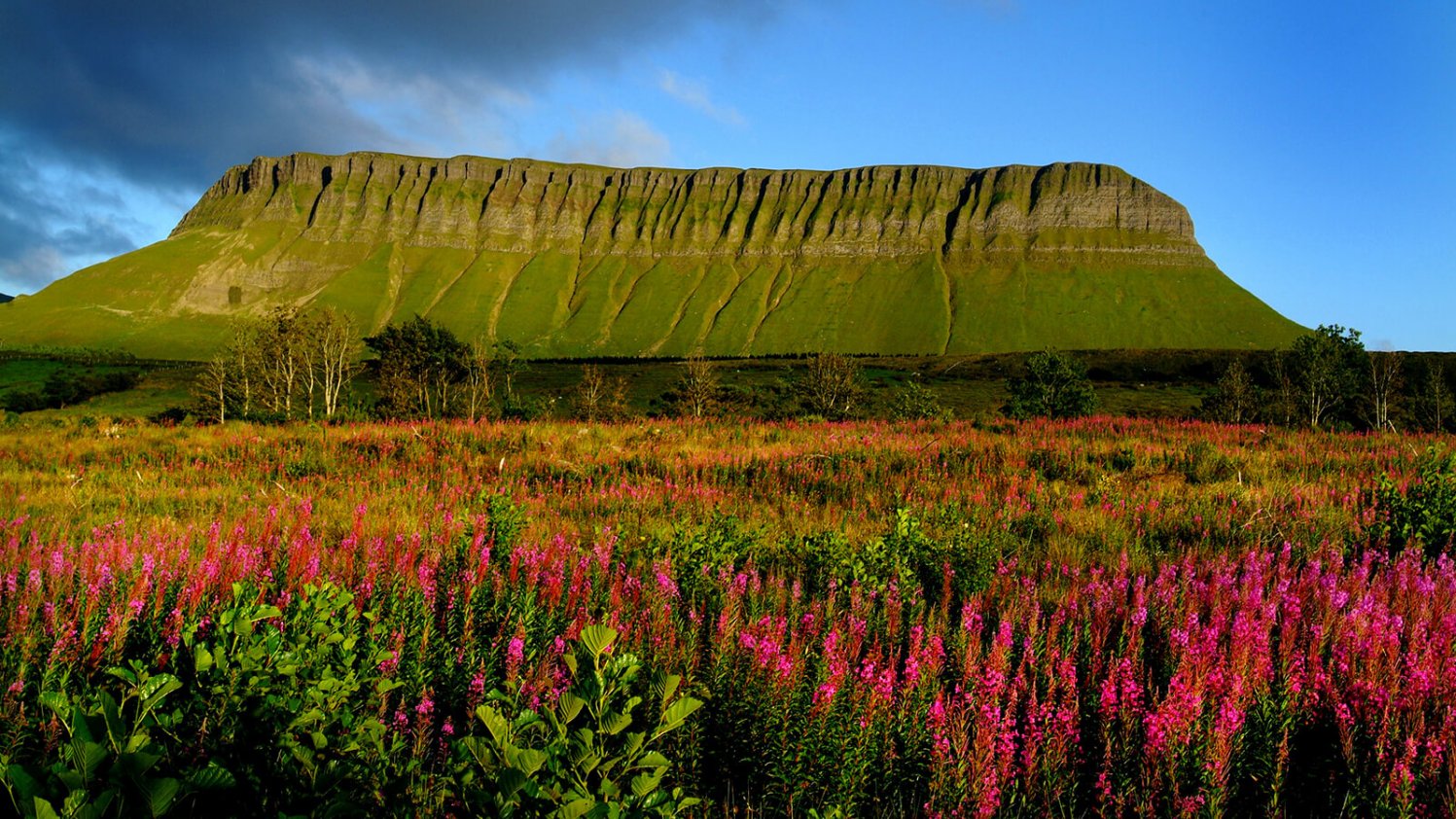 Table Mountain's long lost Irish cousin, Benbulben is a distinctively flat-topped mountain. It was carved out of the landscape during the last Ice Age.

Sligo, the surrounding region, is not too shabby either. WB Yeats described it as the land of heart's desire. Horse ride along a stunning Atlantic beach. Take a dip in a seaweed bath. Or go cold water surfing on some of Europe's best breaks. 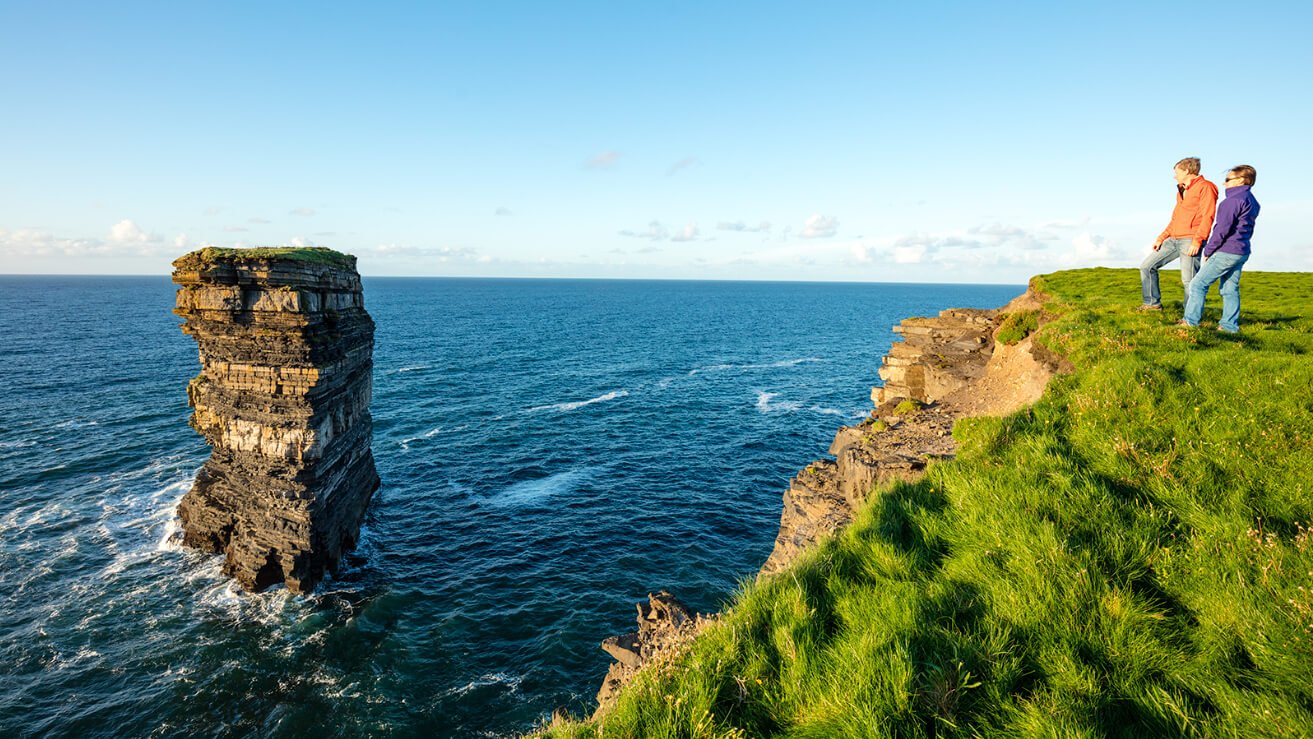 Northwestern Mayo is one of Irelands most remote and windswept corners. And certainly one of the most scenic places in Ireland.

At its tip sits dazzling Downpatrick Head. Waves crash against the shore. Dun Briste sea stack stands aloof just off the shore. It feels like the edge of the world! 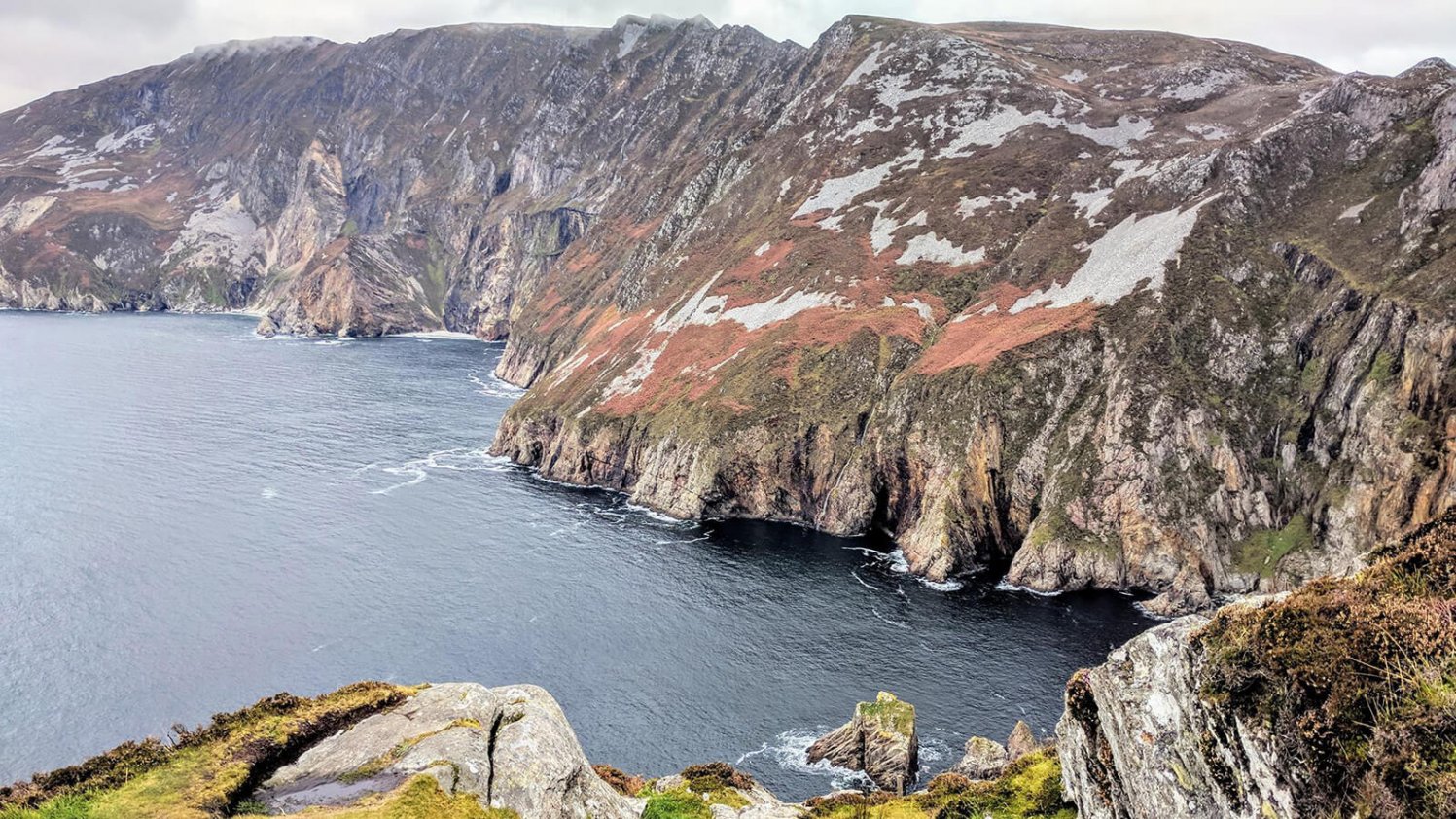 Slieve League sea cliffs in North West Donegal are 600 meters (nearly 2000 feet) high; among the highest sea cliffs in Europe. The views from the top let you take in the expanse of Sligo Bay and the mighty Atlantic Ocean. 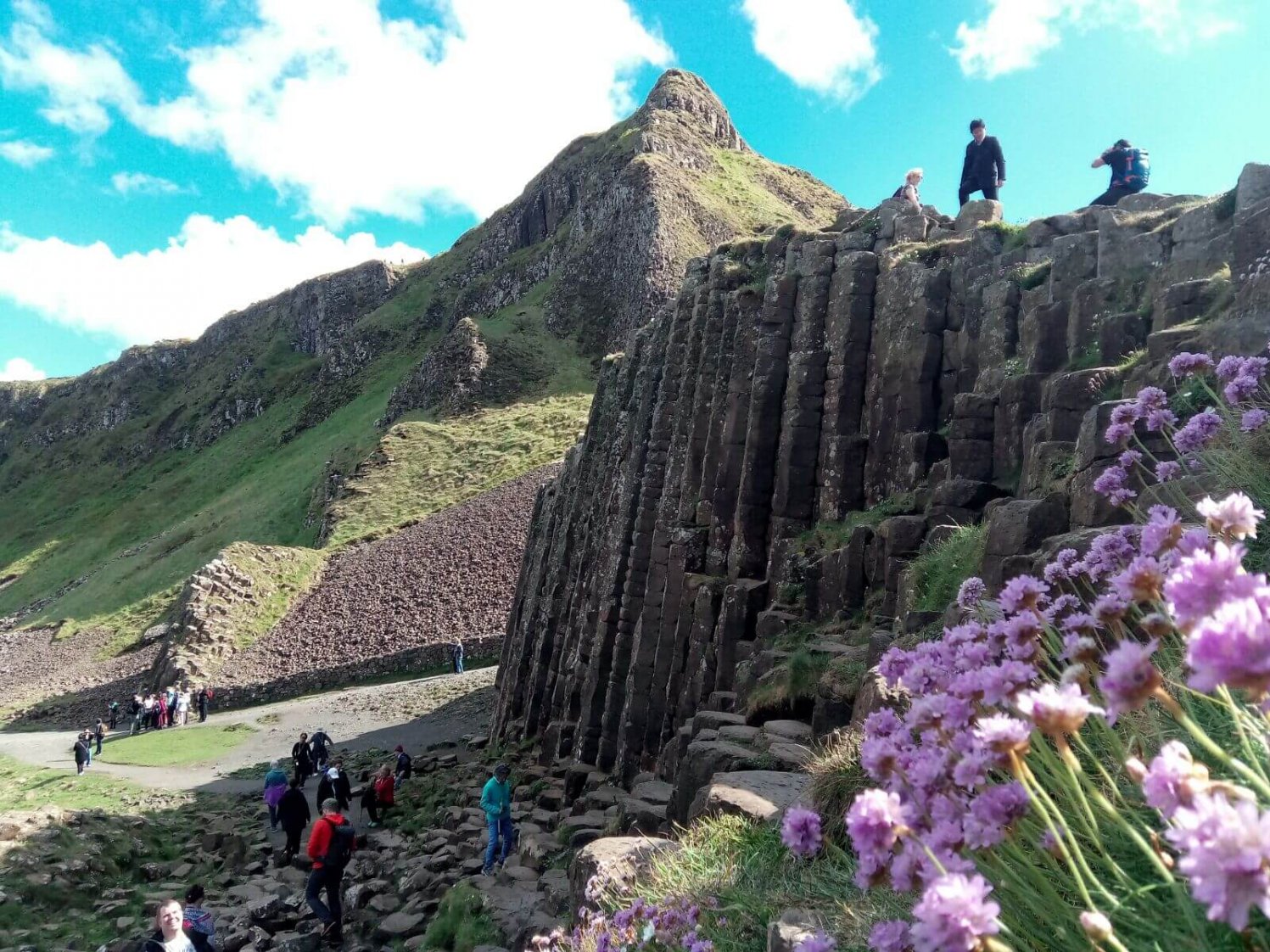 One of the most scenic places in Ireland - and definitely one of the best driving routes - winds along the Causeway Coast in Antrim.

Aside from spotting Game of Thrones filmsets, there's lots to do. Hop from hexagon to hexagon at the Giants Causeway - 40,000 interlocking basalt columns created by volcanic activity millions of years ago.

After you've braved Carrick-a-Rede rope bridge, toast your trip at Bushmills, the oldest whiskey distillery in the world.

By taking our 7 Day Vagbond Magnetic North Adventure Tour you can experience the above.