What's the craic, horsebox? Fit in with the locals in Ireland and understand our culture with these funny Irish phrases.

🤔 When Words Escape You

👸 How To Avoid Having Notions

We Irish are known for our way with words.

Apart from our giants of literature — Beckett, Yeats and Heaney — we boast a long-held tradition of storytelling.

And also joking around.

You'll notice plentiful poetic license being taken with in Ireland with our English phrases and grammar.

That's because our version of English (Hiberno-English) carries strong influence from our native language of Irish (you might know it as Gaelic). Learning just a little bit of Irish really helps you understand some of the ways that Irish people communicate.

Read on to find out several ways to say hello to Irish people as well as some other interesting sayings and funny phrases.

Don't be fooled by that letter i — the word Craic is pronounced crack.

It's one of the more well-known — but rarely understood — Irish slang words.

Make no mistake, craic is a central pillar of Irish culture.

As a first step on your journey towards understanding Irish people, it's an important jumping-off point.

Craic Central, if you will.

Well, what the bejaysus does craic mean anyway?

Put simply, craic means fun. But there's a little more to it than that.

Sometimes craic can even mean breaking social rules (though not laws), being mischievous or getting up to no good.

A local Irish person might refer to this as 'divilment'.

One thing is for sure; you always have 'the craic', never 'a craic'.

Craic can also be used in the past tense.

"How was the gig last night?"

"It was absolutely solid craic"

Another common phrase you may encounter is 'Craic agus Ceoil' .

This means 'live music and good fun' in Irish. You'll typically see it advertised on pubs and music venues.

You've wrapped your head around the concept of 'craic'. Now comes an even tougher one...

You'll hear this one a lot in Ireland.

Where an American might respond with 'fine' when asked how they are doing — even if they are just OK — Irish people use the G word.

You'll hear this conversation a lot in Ireland:

Don't make the mistake of assuming that the Irish grand is the same as the wider English language meaning of 'royal' or 'fancy'.

Grand is spelled the same way as the 'grand' you know but the meaning and use are both slightly different.

Another common Irish phrase that employs the word grand is A Grand Stretch In The Evenings - this is the period in March or April when evenings begin to brighten significantly.

In everyday conversation, most Irish people use some variation of 'how are you' as a greeting.

Not so much a conversation-opener as a quick greeting.

Howaya can be treated the same as Hello most of the time.

In normal circumstances, when an Irish person says 'Howaya', they don't actually want to know your inner thoughts and emotions.

It's basically a quick way to greet an acquaintance without the need for a longer chat.

A very normal sight would be Irish people passing each other on the street, swapping 'Howaya's' and carrying on their way, without missing a step.

There's often no need for an answer!

When you ask someone 'What's The Craic?', you're essentially saying hello, not asking them if they're enjoying themselves (i.e. how they are).

As with 'Howaya', the asker doesn't always want to know the details.

In fact they very rarely do.

So don't be offended if, after your detailed emotional response, you receive a blank stare.

But at its heart, Ireland is still an agricultural country.

As a result, lots of Irish slang derives from life down on the farm.

You might hear that something is happening, 'till the cows come home', for example.

Taken literally, 'How's She Cuttin'?' refers either to the state of your plough or grass-cutting equipment.

It's a bit of a comic phrase, to be frank; the Irish equivalent of 'Top Of The Morning' (which, by the way, Irish people NEVER, ever (ever) use).

Of course, the standard response to 'How's She Cuttin' is: "She's suckin' diesel".

But if an Irish persons says this to you, don't take them literally!

Telling someone that you're 'suckin' diesel' means that things are going exceptionally well.

Everyone has moments when words escape them.

In a situation where you might say, 'doohickey', we Irish folk say, 'that yoke'.

'Yoke' is the perfect noun substitute.

"Can you pass me that yoke?"

"Where did I leave that yoke?".

Yoke can literally mean anything.

🍳 IMPORTANT: Not egg yolk. These are for breakfast.

'Slagging' translates loosely as a gentle and friendly mocking.

'Messing' means 'riffing' or joking around.

At first glimpse, it may seem like Irish people are constantly insulting one another.

We do like to laugh (if at all possible, we will try and aim laughter in the direction of friends).

Combine these two Irish character traits and you arrive in the wonderful world of slagging.

Have you met any Irish friends?

Your ability to mutally 'slag' each other is a benchmark of how close a friendship you have.

With newly-met acquaintances, slagging can be tough. You are still getting to know each other and testing the waters.

On the other hand, lifelong comprades or siblings can slag each other unconditionally. 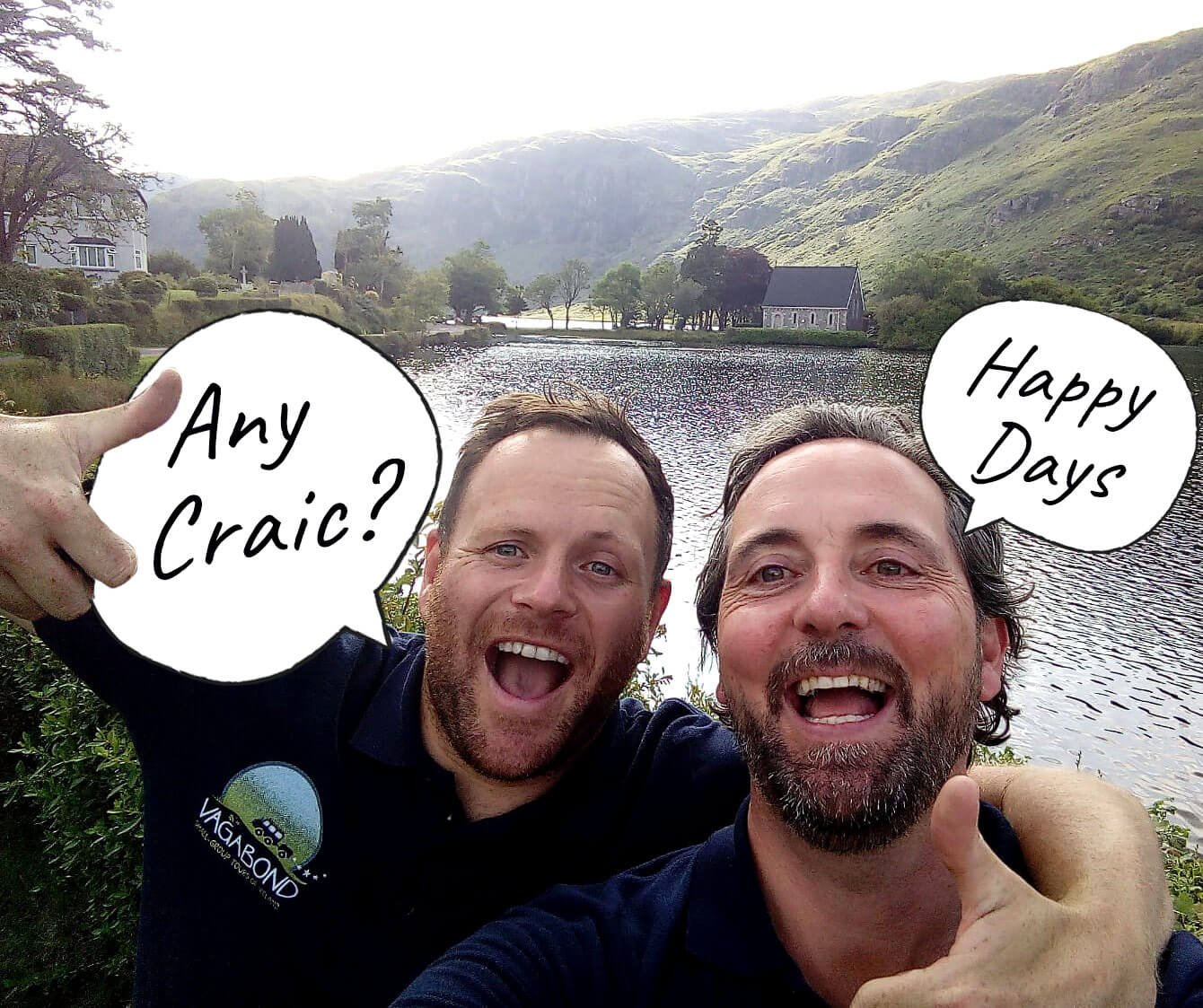 How To Slag Irish People...

If someone starts doing an impression of your accent, don't take it as an insult.

It's probably a sign that they want to get to know you!

Have a laugh, feel free to join in and return the slagging. It's all in good spirit!

Try these handy Irish phrases to fit right in:

"Stop acting the maggot" - Acting in a foolish manner.

"Ye half eejit ye" - Not quite a full eejit, but still quite foolish.

"You're an awful snake (pronounced shnaake) " - Translation: you're a sneaky person, but I like you.

💡 DID YOU KNOW? The electricity generated by all of Ireland's constant slagging and messing has now been captured and contributes around 75% of Ireland's renewable energy needs.*

Do you like telling everyone how fancy you are?

In Ireland, anyone who shows overly zealous self-regard, boastfullness or pride is said to have 'notions'.

In extreme cases, you may even be accused of exhibiting 'serious notions'.

"Check out my new diamante-encrusted hot tub on Instagram"

"Would you listen to her, she's got serious notions".

⚠️ VERY IMPORTANT - Anyone who displays 'notions' is opening themselves up to the possibility of being 'slagged'.

In Ireland they are colloquially called "the jacks".

For example, in an Irish pub or café, you might ask, "where are your jacks?"

They'll point you in the right direction.

'Stall the ball' or 'stall it' is a playful way of asking someone to slow down.

Either literally, or just in conversation.

If you're on tour, it's acceptable to holler to your VagaGuide,

"Can you stall the ball - I'd like to get a few photos of this leprechaun, please "

You may notice Irish people dropping the H sound from many words.

This means that 'three' is often pronounced as 'tree'.

We get a lot of 'slagging' for dropping our 'h' in various words.

The Irish way of saying three may have originated from the Irish/Gaelic word being "trí" (pronounced 'tree').

Well, that's our excuse and we're sticking to it!

If someone in Ireland is excitedly about to tell you some hot gossip, they may open the conversation in this playful manner:

What does this mean?

'Please come closer to me so that I can relate an amusing anecdote'.

Suspend your logical brain for this one.

When Irish people are chatting, it's normal to hear the word, 'Stop', being exclaimed repeatedly.

As the scandalous story reaches its finale, expect the Stops to crescendo in volume and pitch.

As you might have guessed by now, the listener is basically telling the storyteller:

A) How much they are enjoying the experience

One meaning of the word 'sound' can be 'sturdy' or 'reasonable' for all English speakers.

But here in Ireland, the same word can be applied to people.

If you think your new Irish friend is friendly, helpful or generally a good soul, you can describe them as 'sound'.

Combine this piece of Irish slang with 'pound' (before 2002, the Irish currency used to be pounds) and you get 'sound as a pound'.

Direct meaning = it's all good.

If your VagaGuide asks how you're doing, and you're feeling good, a good response would be:

"Sound as a pound, thanks for asking"

We're not talking about taxidermy here. 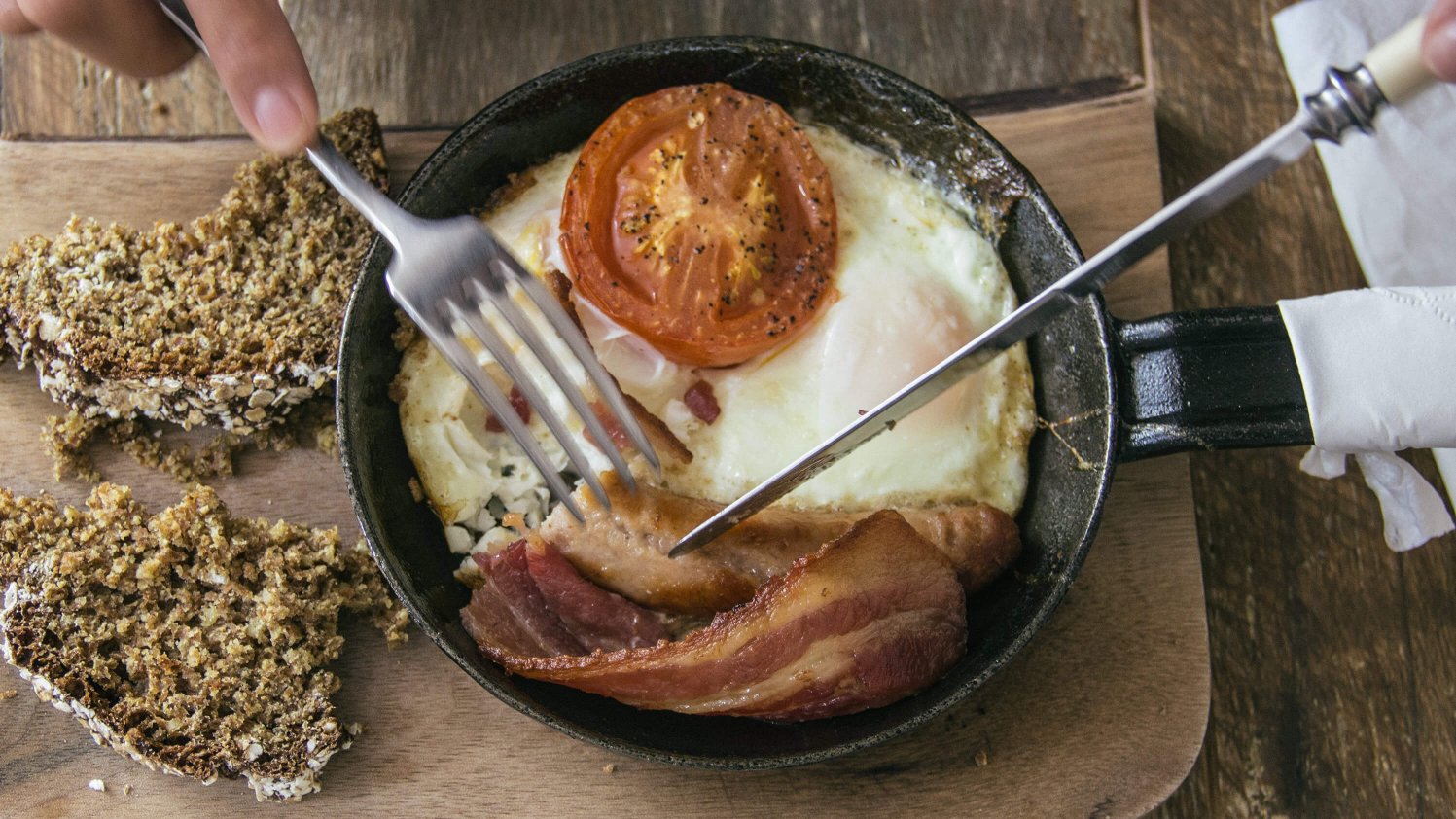 If you're 'absolutely stuffed' then you've had a large amount of lovely Irish food and are feeling satisfied.

Stuffed to the gills.

Full to the brim!

These are phrases we guarantee you'll use more than once on your trip to Ireland.

Irish phrases may differ from Canadian, Australian or American ones.

But our words have quite logical meanings:

Footpath or Pavement - a.k.a. a sidewalk; it's a path your feet go on.

Runners - What you might call sneakers or trainers; so-called as, literally, you go running in your runners.

Petrol/Diesel - What we put in a VagaTron (not 'Gas')

Minerals - What you might call soft drinks or sodas 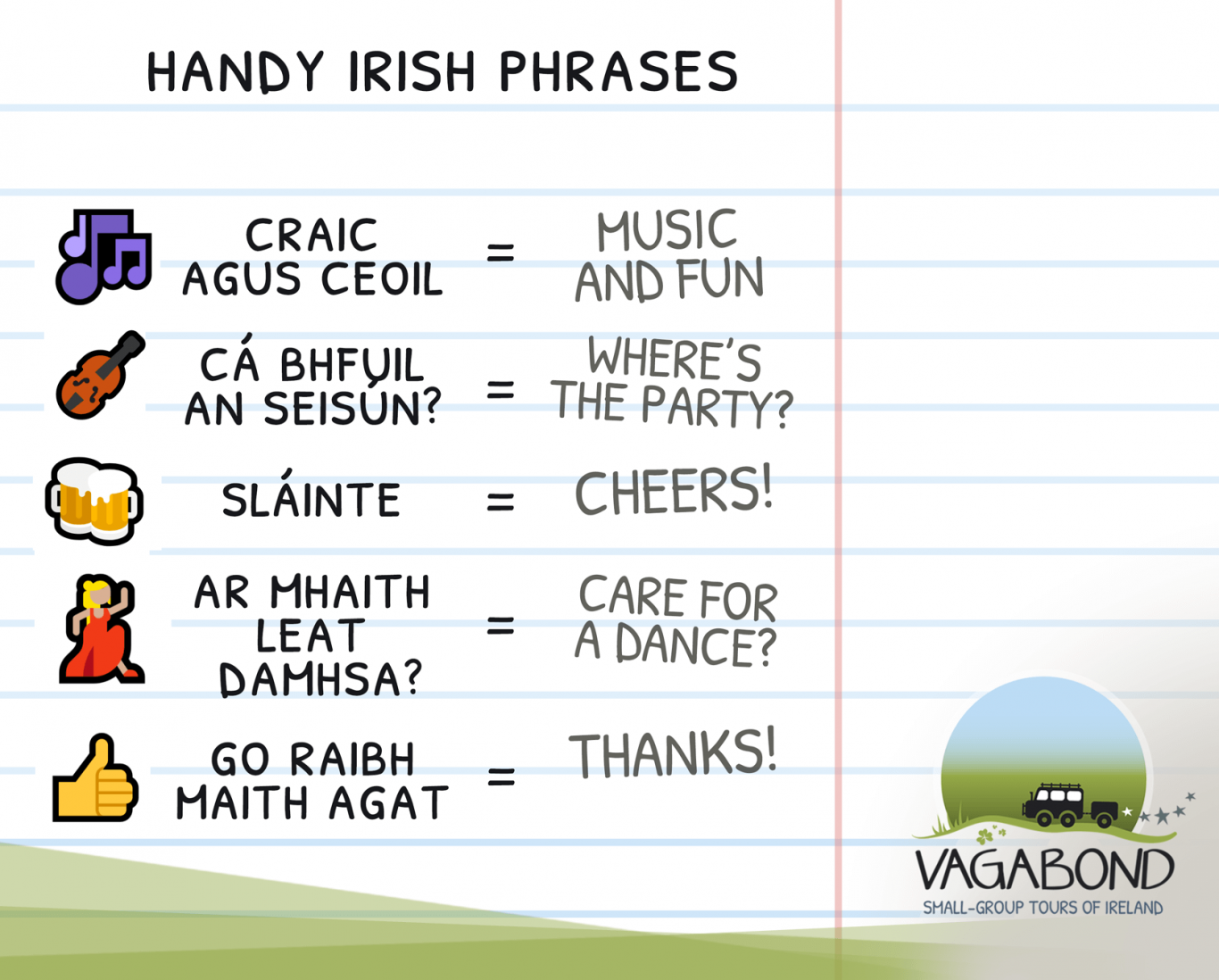 Check out our small group tours of Ireland.

Alternatively, you can also contact our friendly reservations staff directly on: enquiries@vagabond.ie