What's In An Irish Breakfast?

There's a good reason our great value tours include all Irish breakfasts. After years of in-depth research, VagaGuide John breaks down exactly what's in an Irish breakfast. 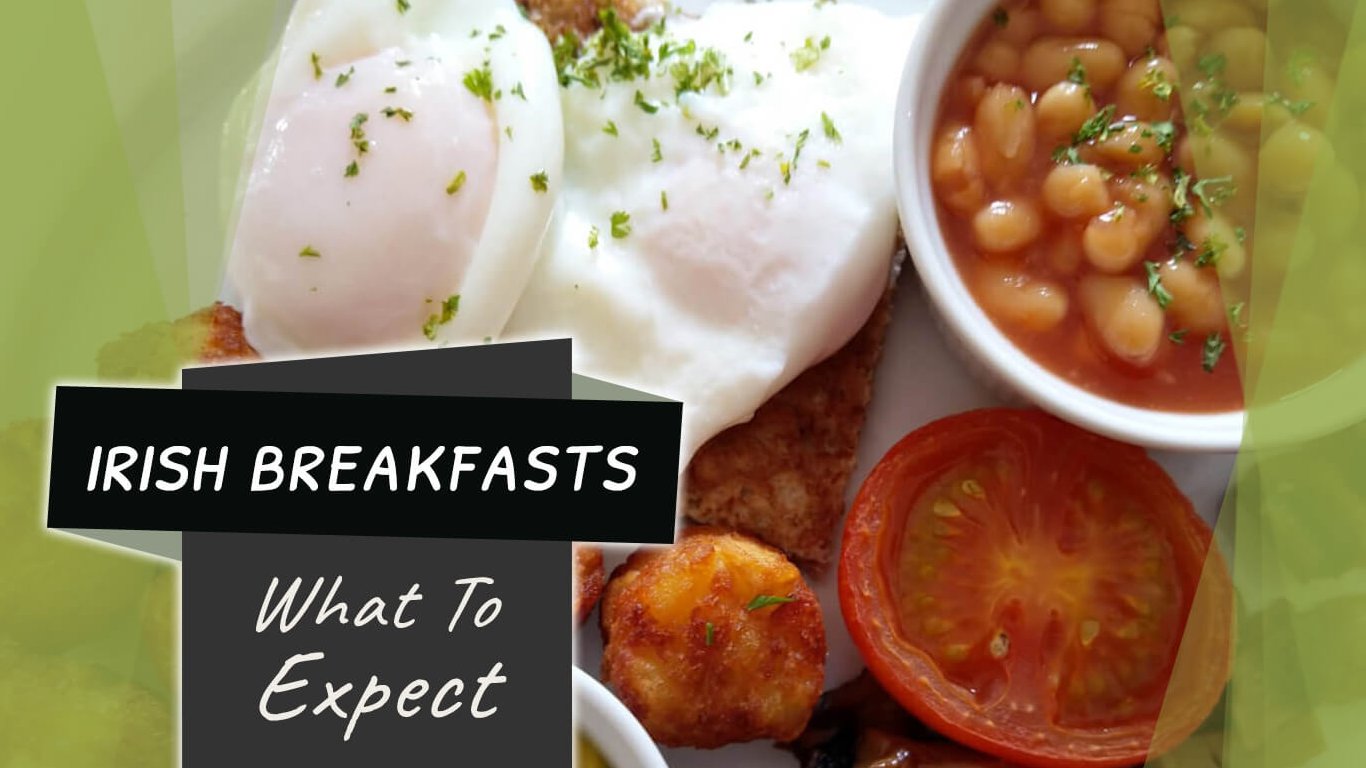 🥓 The Essentials of a Full Irish Breakfast

🥔 Side Dishes You've Got To Try

🍟 In or Out? Controversial Irish Breakfast Inclusions and Debates

🐟 Alternatives to the Traditional Irish Breakfast

What's in an Irish Breakfast? The Essentials

Breakfast in Ireland can mean anything from cereal to salmon. But a full Irish breakfast means a particular set of ingredients. Bacon and sausages. Pudding and eggs. Toast and butter. Others are optional.

Don't forget that if you're hungry to explore Irish food, you can get a taste on our 6 Day Vagabond Epic Ireland Food Tour

Otherwise, grab your knife and fork and tuck right in!

You'll find back (wide) or streaky (narrow) rashers in an Irish breakfast; both types may look and taste different to what you might expect. Irish bacon is chunkier than American bacon, with a little more meat.

How many should you include in the perfect Irish breakfast? It takes two baby! 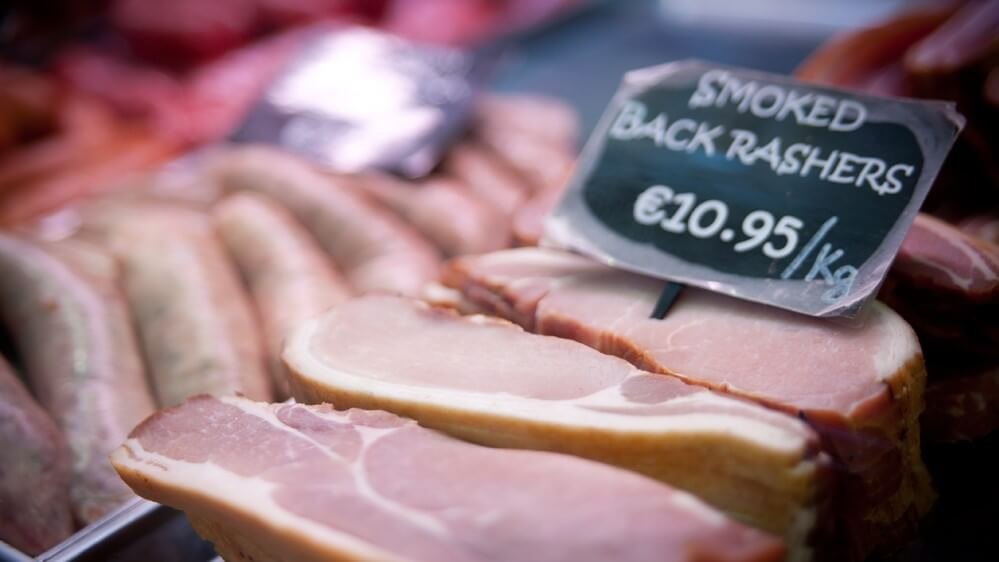 Eggs are really the heart of an Irish breakfast.

Scrambled. Fried. Poached. Hard- or soft-boiled. In Ireland, we focus more on the style of cooking eggs rather than the consistency.

Although most Irish people understand 'sunny side up' and 'eggs over easy', you won't hear those terms often. 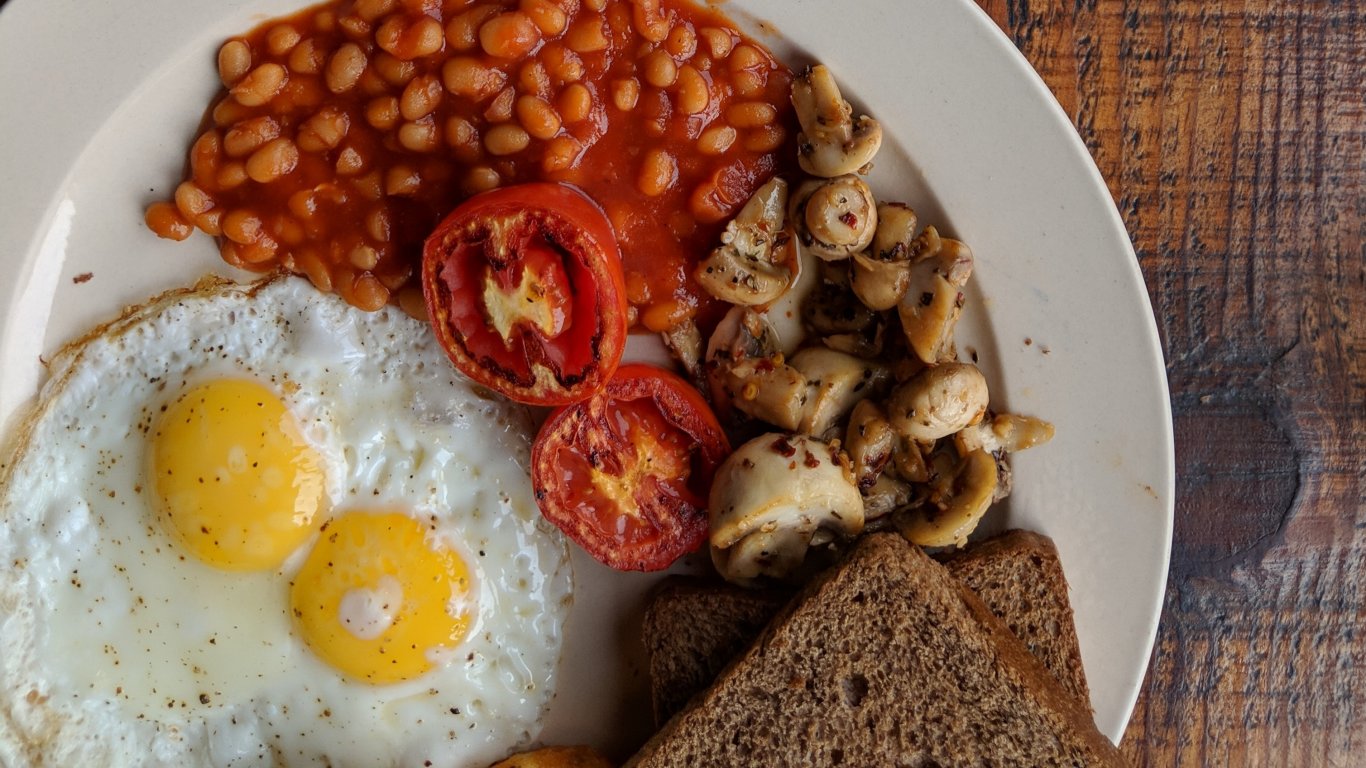 Expect to get two sausages on your Irish breakfast plate. And expect to want more when you're finished!

💡 Did You Know? 20% of Irish people admitted to smuggling Irish sausages in their luggage when going on vacation.

You might know it as blood pudding or blood sausage. We call it black pudding.

Let's clear something up: yes, black pudding is made from blood. Blood is added to pork fat or beef suet, then mixed with oatmeal, oat groats or barley groats.

Don't let the unappetising ingredient list stop you enjoying this Irish delicacy. Just wait until you taste it.

Clonakilty from Cork is Irelands’ best known pudding brand. You'll find it on sale everywhere, from gas stations to airports. But lots of local villages around Ireland produce their own black pudding versions. Annascaul, on the Dingle Peninsula, is famous for its black pudding.

White pudding is similar to black pudding but without the blood. A sort of diet pudding.

Both black and white pudding are typically sliced into the size and shape of a hockey puck.

The taste of white pudding is akin to Scottish haggis. Delish!

Mushrooms won't always appear on your Irish breakfast. But if they don't, you should order some!

Pile them high on your plate and tuck in! Magic. 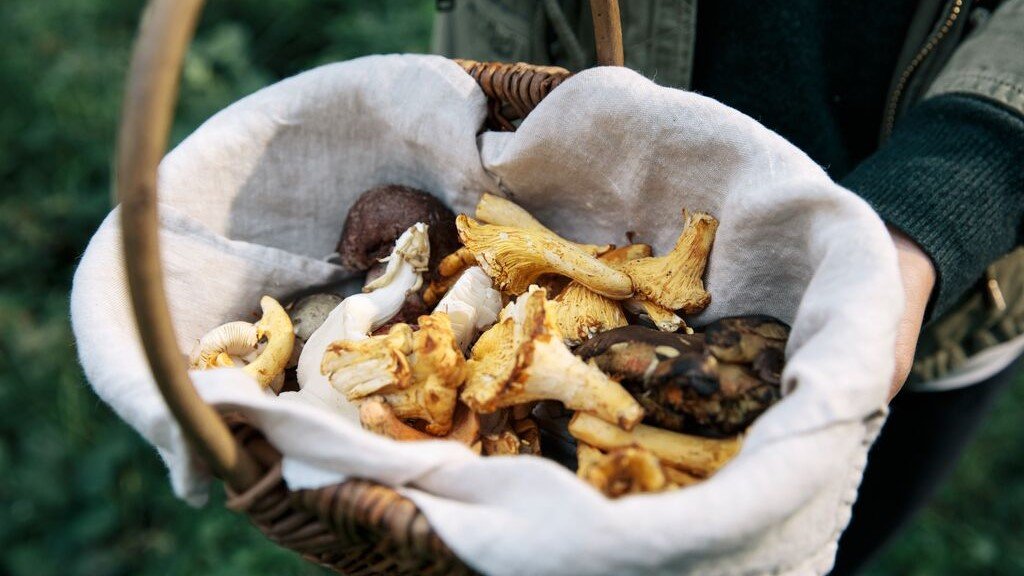 Fruit or vegetable? Who knows...

What we do know is that fried or grilled tomatoes are an important part of any full Irish breakfast.

Toast is essential when it comes to the Irish breakfast. Dripping with creamy Irish butter, no Irish breakfast is complete without a ready supply of toast.

Make sure you try Irish brown bread toast too. It's generally made from wholemeal flour and is yeast-free, with bicarbonate of soda as the raising agent. Irish brown bread is sometimes known as wheaten bread or wholemeal bread. Of course it tastes better if your Irish Mammy makes it!

Lashings of creamy Irish butter with a smattering of jam or marmalade and all will be well in the world. Feels like a soft buttery hug from the inside. Healthy too. 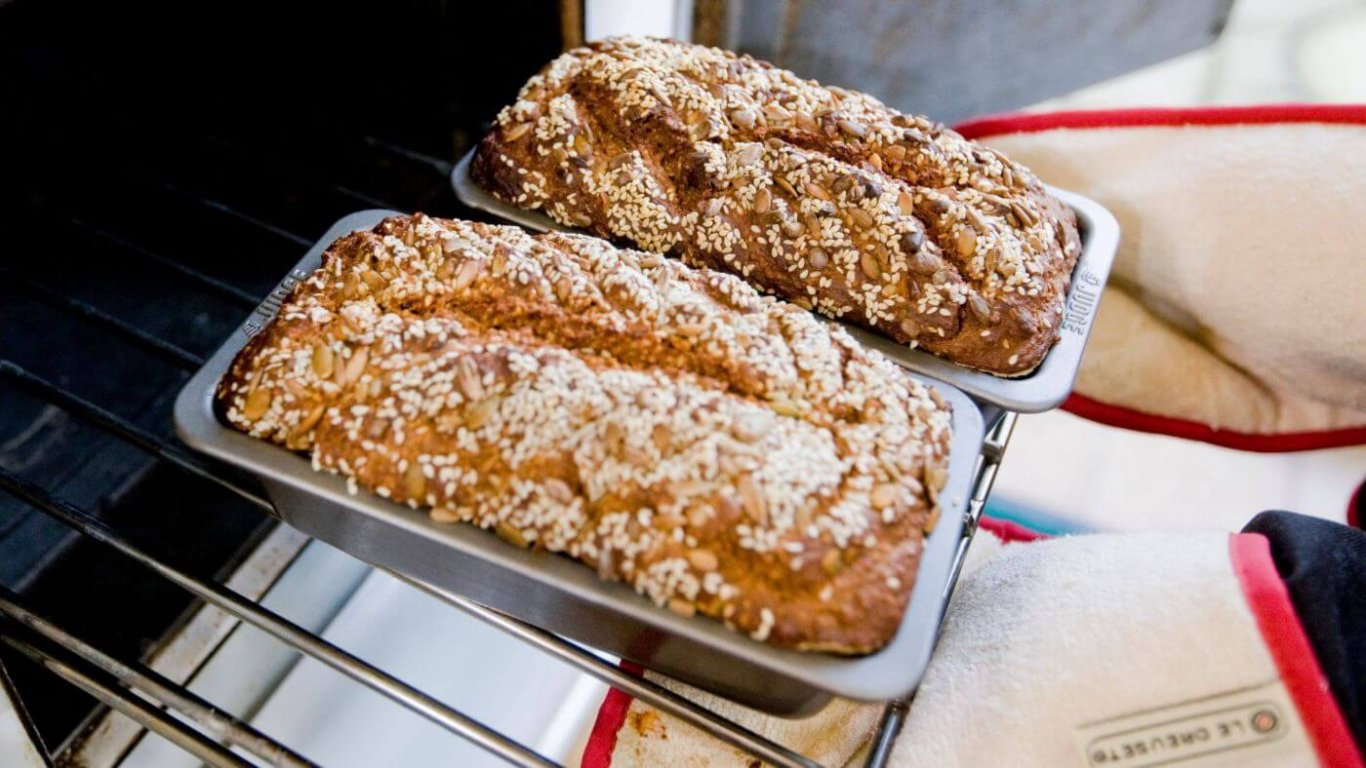 Creamy Irish butter is central to your enjoyment of the full Irish breakfast.

Ireland's mild climate and plentiful rain results in uniquely rich soil. This fertility allows for lush green grass. This lush grass leads to extremely happy cows, who munch away all day long and deliver some of the best butter in the world.

What more can I say? Butter me up.

No matter where you tour with us in Ireland, you'll notice regional variations in the great Irish breakfast.

If you’re lucky enough to be touring Northern Ireland with us, you will no doubt eat an Ulster Fry at some point.

What is an Ulster Fry? It's essentially what's in a full Irish breakfast but with a variety of tasty breads unique to Northern Ireland and the northern province of Ulster.

Soda farls are a staple of the famous Ulster Fry. They're fluffy, pan-baked flat breads that toast beautifully and pair deliciously with Irish butter. Made using either white or wholewheat flour and baking soda (no yeast), soda farls are rarely spotted on a full Irish breakfast menu outside Ulster.

Taste a soda farl for yourself on our 7 Day Vagabond Magnetic North Adventure Tour.

Check out the short video below on how soda farls are made….

Potato bread is quite similar to soda farls. The difference (as you might have guessed) is the addition of mashed potato to the ingredients.

Potato bread can be enjoyed toasted and swimming in Irish butter. But it's most at home as the centrepiece of an Ulster Fry.

Boxty is another variety of traditional Irish potato bread. It hails from the north midlands of Ireland rather than Northern Ireland. The ingredients are finely grated raw potato and mashed potato with flour, baking soda, buttermilk and sometimes egg. Boxty is fried in bacon fat to render it crispy on the outside and soft on the inside. Yes. It really does taste as good as it sounds.

Would you like to make potato bread at home? Sit back, relax and enjoy this charming recipe guide:

While not strictly a regional Irish breakfast, you will find breakfast rolls served all over Ireland. They're a staple in the construction industry. They are a classic; an institution!

What's in a breakfast roll? Simple! Everything that you might be served on a a plate can be in your breakfast roll: rashers; sausages; eggs. All smothered in red or brown sauce.

The bread used for breakfast rolls is either a soft white or brown roll, or a crispy, white, French-style baguette. Nom.

In Waterford, breakfast rolls are served in 'blaa' rolls.

What is a Waterford Blaa? This fluffy white bread roll dates back to the late 17th century. Huguenots arrived in the region as Protestant exiles from France, bringing with them a tradition of baking white bread. 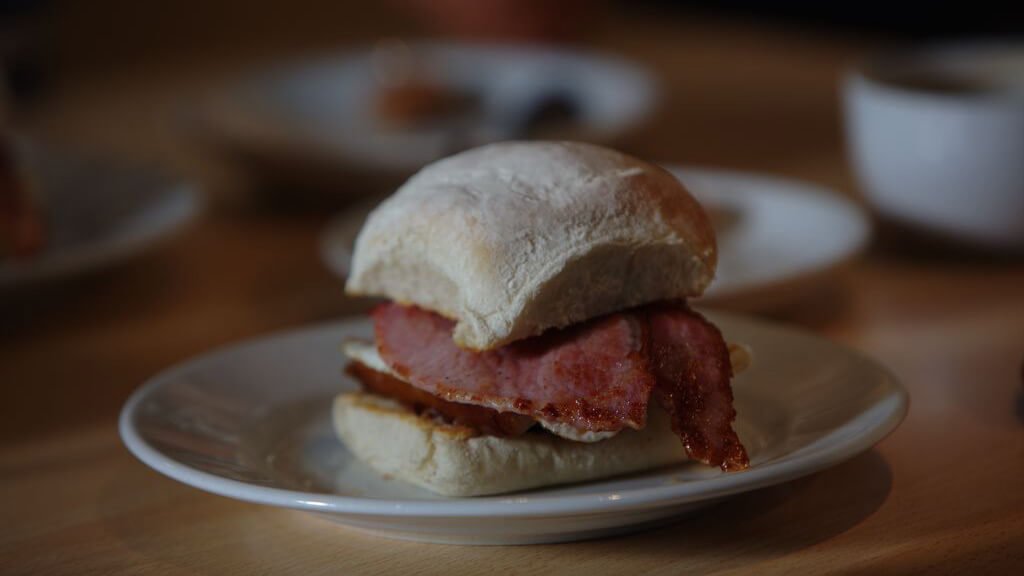 It’s thought that blaas were made from leftover pieces of bread dough which couldn’t be used for making loaves. The name blaa most likely comes from ‘blaad’, an old French word for flour. Another theory is that the name originates with the term ‘Blanc’, meaning white in French.

Settle the controversy for yourself on our 5 Day Vagabond Adventure East Tour, which explores the blaa heartland of Waterford and Ireland's Ancient East.

These side dishes are never the stars of the show. But just like Batman's Robin, their supporting role makes your full Irish breakfast great.

Similar to boxty, but usually smaller and triangular in shape, hash browns will be familiar to our North American visitors.

Fresh home-made hash browns are the way forward even though you'll more normally come across the supermarket variety. Hash browns are not an essential part of the classic full Irish breakfast but can feel like a little potatoey bonus if one appears on your plate. 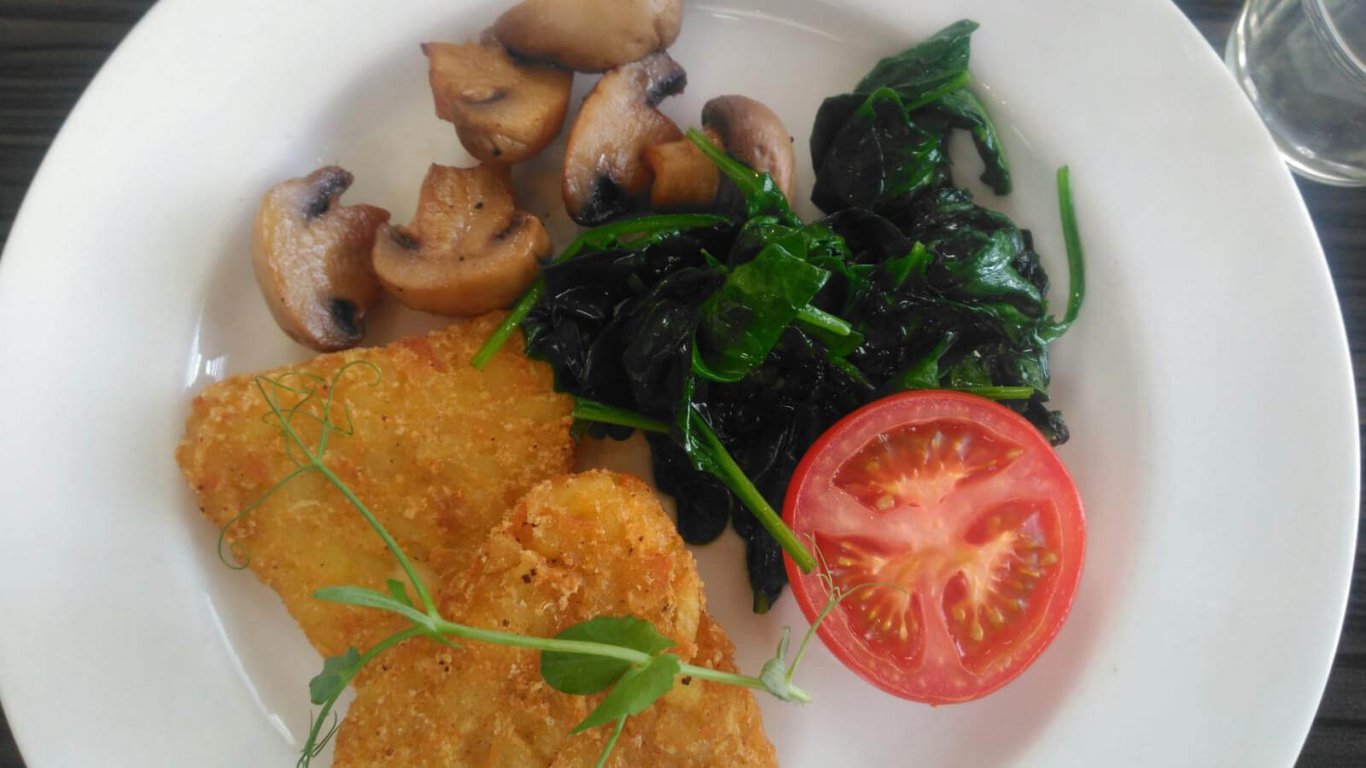 Often incorporated to put leftovers to good use. Potato and butter are the staple ingredients and after that it’s up to you. Bacon, chicken, spring onion/scallions, herbs and spices.

Nothing goes to waste. Nom nom. 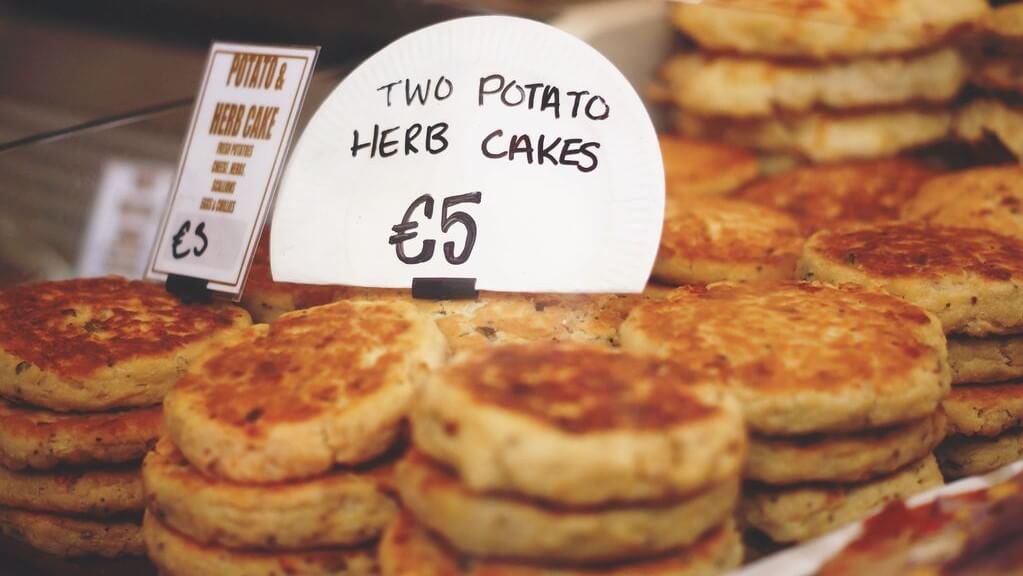 Eat a full Irish breakfast and you're not just enjoying a meal. You're taking part in an Irish cultural experience.

There are a number of controversial decisions you'll have to navigate in order to enjoy your full Irish breakfast to the full. Lyons or Barry's tea? Red or brown sauce? This may get complicated...

It's official: Ireland loves tea. We Irish are officially the second biggest drinkers of tea in the world.

Coffee is, of course, available. But with your full Irish breakfast, the drink of choice really should be tea.

A debate over the country's favourite tea brand divides Ireland. Do you prefer Barry’s or Lyons? You’ll just have to try them both and see for yourself. 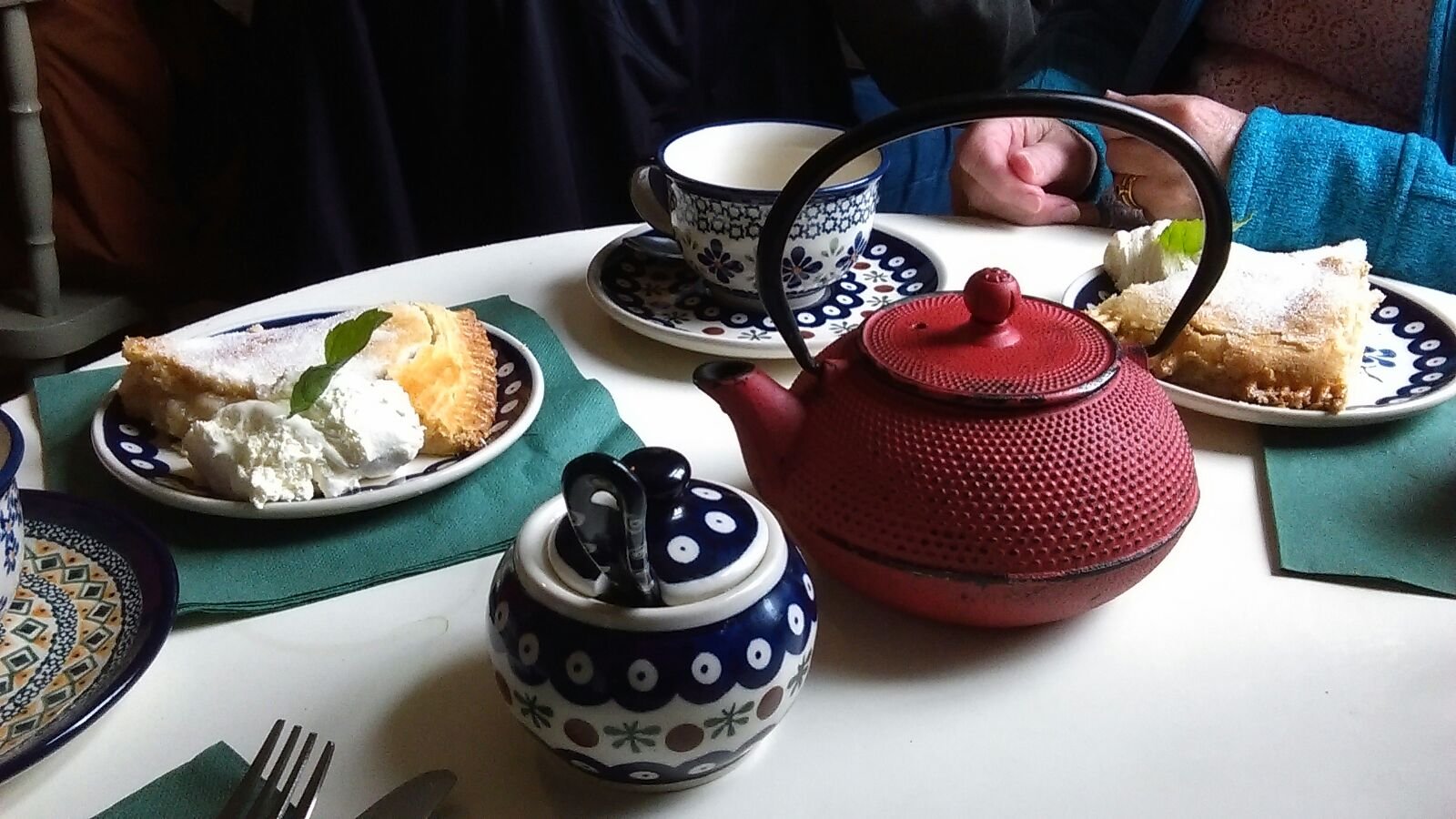 This is a tricky one. Many people prefer red sauce (tomato ketchup) on their full Irish breakfast. A hardcore of brown sauce aficionados still exist though.

What exactly is brown sauce? Its flavour could be described as a mixture between ketchup and barbecue sauce; a little bit sweet and a little bit tangy. Goes perfectly with the full Irish breakfast!

Chef, HP and YR sauce are popular brands of brown sauce that you'll see in Ireland.

People have been known to spread it on their bread like butter. Not me though - I would never do such a thing.

Beans, beans, good for your heart... The more you eat, the more you...

I can’t remember the rest of that tune!

In case you've never had the pleasure, baked beans are canned white beans in a sweet, salty, tomato-based sauce. 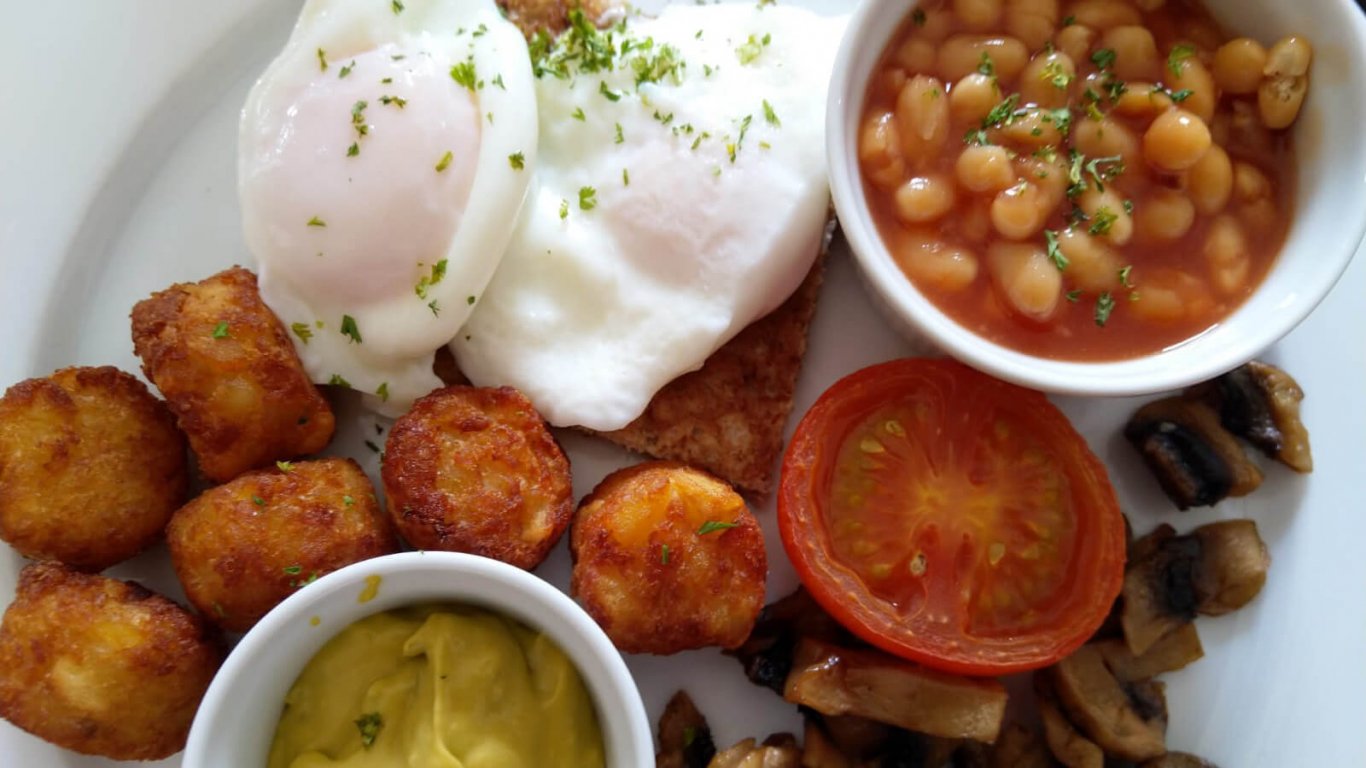 LOTS of reasonable people don’t like baked beans within fifty feet of their Irish breakfast. I say, keep an open mind!

Want to start a lively discussion with an Irish person? Ask them if they prefer Bachelors or Heinz-branded beans.

A very controversial inclusion to any full Irish breakfast - but it's been known to happen.

Chips, or french fries, feel like they shouldn’t be on a full Irish breakfast plate. But then, no-one ever sends them back. 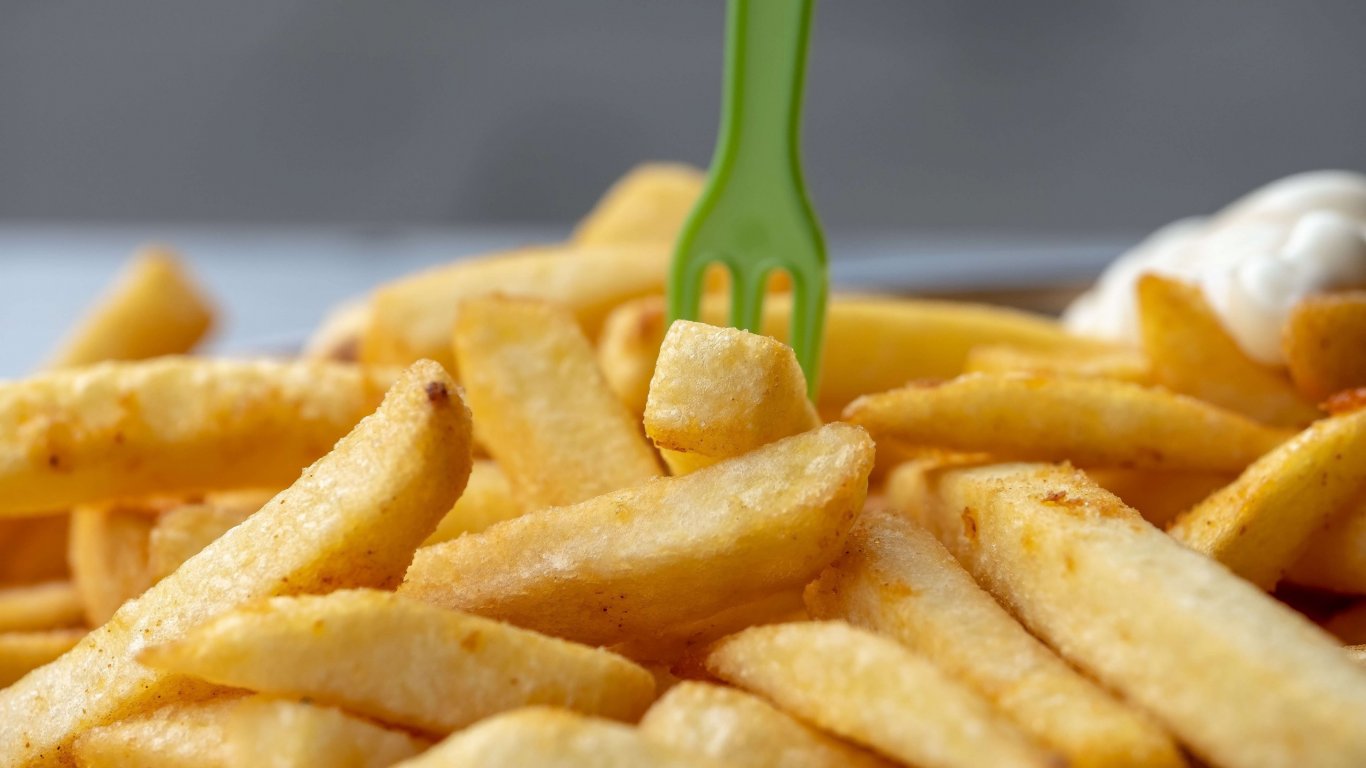 Yes, liver. Certainly not a mainstay of the full Irish breakfast. Definitely not to everyones’ taste. But it does happen.

The Vagabond jury is out on this one...

Alternatives to a Full Irish Breakfast

Not in the mood for a full Irish breakfast? Feeling continental? Eating vegan or vegetarian? We have good news.

All of our fantastic accommodations serve alternatives to the full Irish breakfast, buffet-style. Choose from freshly-baked pastry, croissants and bread. You'll typically also be able to choose from cereals, yogurt with fresh granola, an array of fresh fruit juices and fresh coffee or tea served at your table.

What a perfect way to wake your taste buds first thing in the morning! 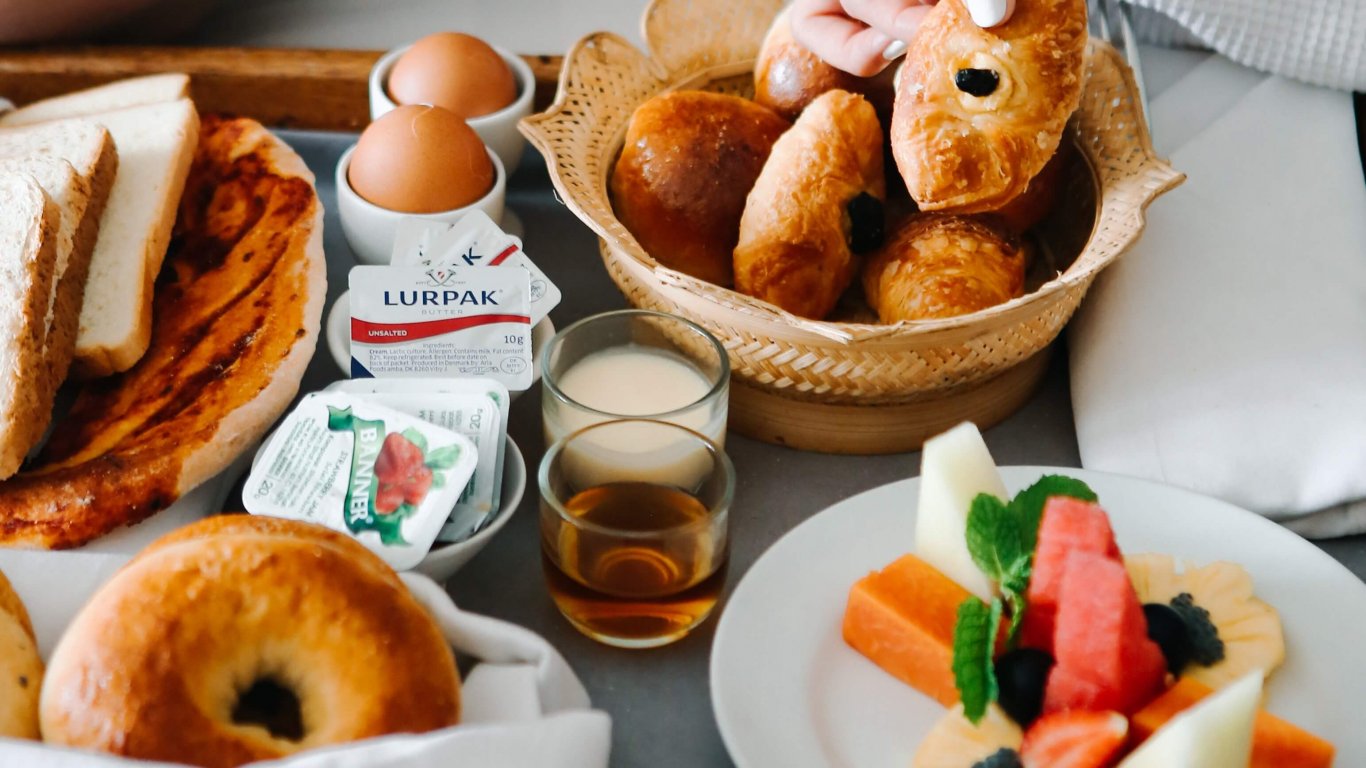 An ancient food. Possibly the most ancient food. Porridge is what Irish people call oatmeal. If you can't fit an Irish breakfast, it's a nutritious and filling start to any day touring Ireland.

Oats have been grown in Ireland for centuries because they adapt well to our changeable climate.

Unlike in North America, Irish porridge is typically made from rolled oats rather than milled or steel-cut oatmeal. Add a drop of whiskey or cream liquor if you're in the mood - you're on vacation!

Fish?! Yes, fish! If you're eating kosher in Ireland, then a bit of fish goes great with, or instead of, a traditional Irish breakfast.

And why not? Ireland's clean Wild Atlantic Way waters provide some of the world's best seafood.

💡 Did You Know? We include a full Irish breakfast every morning of your Vagabond or Driftwood Tour.

And there you have it. The epic full Irish Breakfast. Vegetarian or meat-eater, there is something for everyone.

You can take your pick. How do you like yours? 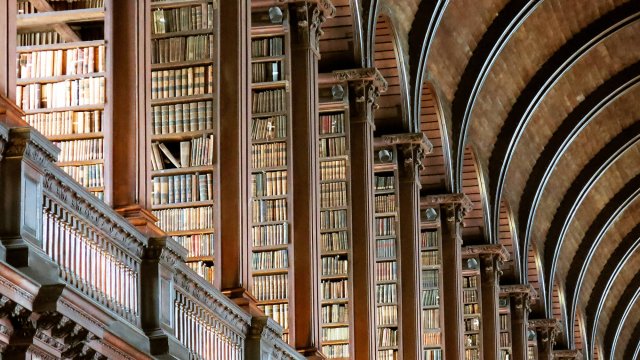 The Best Books to Read About Ireland Before Your Trip