Back by popular demand, our very own traditional Irish music expert and VagaGuide, John McKiernan, takes us on a journey through his top 10 favourite Irish songs. 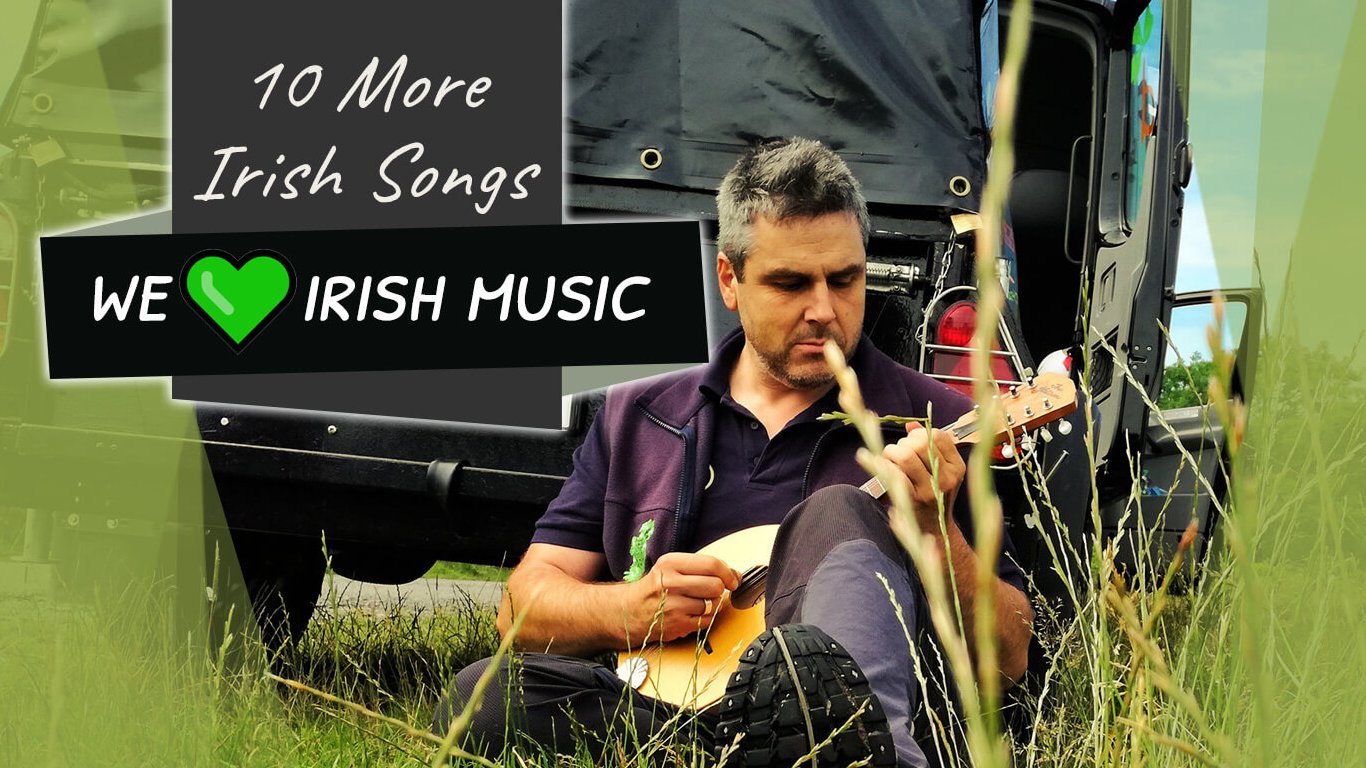 My guests on Vagabond Small-Group Tours of Ireland go wild for Irish music. So I thought, why not give everyone a list of my favourite?

The world of Irish music offers a virtually endless supply of amazing songs. The hard part is choosing just 10!

If you haven't read it already, be sure to check out my first attempt: 10 Irish Songs You Need to Know.

Ireland's answer to Bruce Springsteen, Christy Moore is as Irish as potatoes. With a career spanning 50 years, he lives in the hearts and minds of all Irish people.

This song was written by Jimmy McCarthy, Christy brings a tenderness to it that helps us all feel the raw emotion. Ride On is ultimately about heartache and loss.

I could never go with you

No matter how I wanted to.

I'll go with ya Christy!

The song with no end. This song can just go on and on and on, depending on who is singing it and the extent of their memory. The Rattlin' Bog is a popular pub or session song everyone can join in with at some stage, due to its repetitive nature. Vagabond and Driftwood guests love its crazy finale on tour!

The song itself may as well have sprung from the bog, such are the variety of versions and lack of information on the source of it. Rattlin in this context means 'great' or 'beautiful'. Its a rattlin' song that needs to be sung!

3. It'll Be Easier in the Morning - Hothouse Flowers

No list of Irish music could be complete without the Hothouse Flowers. While they have a rich song list to choose from, this song captures their uplifting spirit and positive vibes more than any other.

Liam and Fiachna ooze music from every pore and continue to create and perform to a level only dreamed of by other musicians. If you ever get the chance to see the Hothouse Flowers live, take it!

A beautiful instrumental tune written by Finbar Furey at the tender age of 19. The Lonesome Boatman captures the spirit of Irish fishermen, eking out a hand-to-mouth living along our western shores, in simple curraghs or Naomhógs.

Of playing the song Finbar says,

I see the boatman rowing me towards the shore, the wind and waves are changeable and he always has something different on his mind.'

5. Whiskey in the Jar - Thin Lizzy

While Thin Lizzy's version of this song is probably the best known to us now, Whiskey In The Jar has possibly been in circulation for over 300 years in some form or other.

The subject is the antics of an Irish highwayman, Patrick Fleming. Fleming robbed the English Captain Farrell in 1650, only to be betrayed by a woman.

On a small-group Vagabond or Driftwood Tour we will literally go over the Cork and Kerry Mountains together - and we may very well enjoy some whiskey in the jar too!

6. The Irish Rover - The Dubliners / The Pogues

Attributed to JM Crofts in the 1960s, the Irish Rover acknowledges Ireland's nautical history and continues to be sung and enjoyed around the world to this day.

It's a song about a ship that had,

What could possibly go wrong?!

We loved this song so much we named our 8 Day Vagabond Wild Irish Rover Tour after it!

The version of the Irish Rover by The Dubliners and The Pogues stands head and shoulders above any others.

Written by Father Canon O'Neill after sitting in on the first ever Irish parliament in 1919. O'Neill was inspired to tell the story of those lost in the 1916 Rising while also making reference to those fighting in the First World War.

The Foggy Dew sums up the confusion of the age where there were battles to be fought at home and abroad. Sinead O'Connor featured on The Chieftainsx collaborative album with this haunting version. The pub of the same name in Dublin city centre remains a landmark to this day.

8. Dublin in the Rare Oul Times - Luke Kelly and the Dubliners

Written in the 1970s by Pete St John, this poetic and soulful song tells the story of a changing and modernising Dublin city.

The song's hero is Sean Dempsey, a working-class Dubliner from the rebellious Liberties neighbourhood.

If you're exploring non-touristy Dublin with our handy guide, this is the perfect soundtrack.

Luke Kelly and the Dubliners capture the heart of Dublin with their seminal version of this magical song.

Based on an 18th century Scottish folk song, this tells the story of a foolish drunk coming home each night only to be confronted by his wives lover in the bed where my oul head should be.

The affair is explained away with increasingly unlikely tales.

Ah you're drunk, youre drunk, ya silly oul' fool and still you cannot see

Sure thats a baby boy that me mother gave to me!

⚠️ WARNING: This song make a lot more sense after a few drinks.

Christy is so good he features twice on my list. This time, it's a classic of his own. Lisdoonvarna was inspired by his visits to the famous Irish folk music festival in the 1980s in the West Clare town of the same name.

Christy brings to life the goings on at an Irish town festival and tells the story as only he can.

Nowadays, the Lisdoonvarna music festival has ceased. In its place, a matchmaking festival now takes place annually. Over 5 weeks, 40,000 singletons seek love in all the wrong places! The resident matchmaker is Willie Daly. You couldnt make it up.

Are You In Need Of Irish Musical Therapy?

We have what you need!

🪕 The Role Played By Traditional Irish Music In My Life