Warm up for your Ireland pub and music tour with John, a former VagaGuide and expert on all things Irish, who's here to play you his favourite traditional Irish songs.

Where can I hear traditional Irish music and famous songs from Ireland?

That's a question I've heard many times from our guests.

But you don't need to take one of our Ireland pub and music tours to feel the magic — you can do it right here!

For each folk song I've listed below, a favourite pub for listening to live Irish music is also featured.

Make sure you read to the end to get my highly exclusive, for-your-ears-only, Irish songs playlist. It's now part of the furniture on our Ireland pub and music tours!

Are your speakers turned up? Are your Irish dancing shoes tightly strapped?

This is the ultimate Irish sing-along song.

Most will recognise this classic Dubliners version.

The subject of Molly Malone is a Dublin fishmonger who — let's just say — may have sold more than just cockles and mussels.

This Dublin anthem was most likely written sometime in the late 19th century. But Molly Malone is still sung in pubs, living rooms and showers across Ireland (and beyond).

Molly Malone touches on the heart of the city. Street sellers are a rare sight nowadays, but before supermarkets, people like Molly would have been an important source of food for Dubliners.

Add O'Donoghue's To Your Ireland Pub and Music Tour Route

If you happen to be admiring the buxom statue of Molly Malone in Dublin city centre, make a detour to O'Donoghues pub.

O'Donoghue's is a truly legendary venue. Located 10-15 minutes walk away from the Molly Malone statue, it was here that the Dubliners group first got together to perform.

Where the girls are so pretty...

🎶 The Fields of Athenry

The Fields of Athenry is Ireland's unofficial national anthem.

On any major sporting occasion involving an Irish team, The Fields of Athenry is sung loud and proud by the Ireland fans.

During the 2012 European soccer championships, the Irish team were losing 0-4 against world champions Spain.

Instead of complaining, 1000s of Ireland fans joined together in song for one of the all time great renditions of The Fields of Athenry.

To let the music shine, the German TV commentators in this clip simply stopped talking:

Spine-tingling. That's what sport should be all about.

Athenry is located in Galway, a county you can explore on one of our Ireland pub and music tours.

If you're in Galway city, I love Taaffes Bar and The Crane Bar; both perfect settings for a Fields of Athenry sing-song.

The lyrics capture the tragedy of the Great Famine and the spirit of the Irish:

Low lie, The Fields Of Athenry / Where once we watched the small free birds fly.

Our love was on the wing / We had dreams and songs to sing.

Its so lonely round the Fields of Athenry.

If you're considering a pub and music tour of Ireland, this is undoubtedly one of the most famous Irish songs of all time

This classic folk song has stood the test of time, recently resurfacing in the eponymous Hollywood movie and also in a cover by Ed Sheeran.

Its roots lie outside Ireland, surprisingly. It was in Scotland that the McPeake family created the modern version.

Later, in the 1960s, Wild Mountain Thyme was covered by the Clancy Brothers.

Our tours visit lots of wild mountains... But where's a good pub to celebrate this classic song?

I reckon the South Pole Inn near Annascaul in Kerry is a good bet. 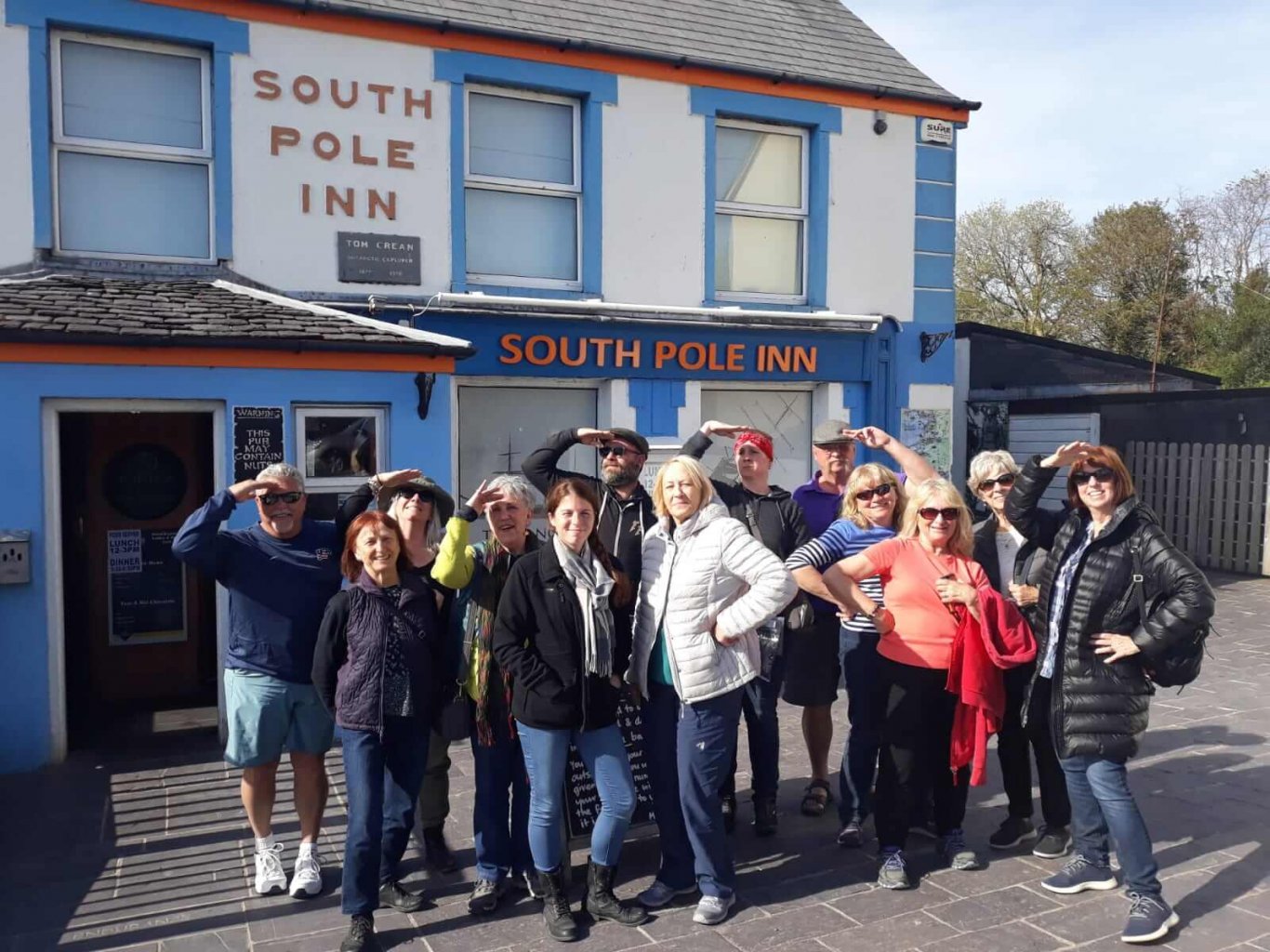 Not only do we land back here after hiking in the hills nearby.

But this historic pub was once owned by none other than Tom Crean. Crean was a heroic presence on three Antarctic expeditions in the early 20th century.

Perhaps this is the most romantic of all Irish songs?

On Raglan Road on an autumn day

I saw her first and knew

That her dark hair would weave a snare

Raglan Road was brought to life when Kavanagh met Luke Kelly one evening in the Bailey Bar in Dublin.

Kelly, seen by many as Irelands greatest singer, set the poem to the air of another traditional Irish song 'The Dawning of the Day'.

There is a depth and resonance to Luke Kelly's voice that still holds true today.

It would bring a tear to a glass eye, as they say.

The Bailey Bar is still there, just off Grafton Steet on Dublin's southside.

Make sure you include it on the itinerary for your Ireland pub and music tour.

The Bailey is the perfect place to grab a glass of whatever-tickles-your-fancy and reflect on this historic Irish song.

The Auld Triangle first appeared at the opening of a 20th century play, The Quare Fellow .

Many attribute the playwright, Brendan Behan, with writing the song's lyrics:

"A hungry feeling, came o'er me stealing
And the mice were squealing in my prison cell
And the auld triangle, went jingle jangle
All along the banks of the Royal Canal"

Behan himself had first-hand experience of prison, having spent time behind bars for his involvement with the IRA.

A heavy drinker from a young age, Behan described himself as 'a drinker with a writing problem'.

Here's a special 2014 rendition of the song:

Add The Cobblestone To Your Ireland Pub and Music Tour Route

Even though there's an actual pub called the Auld Triangle in Dublin, located very close to where Brendan Behan was imprisoned, that's not the pub I'd recommend.

Instead, try the Cobblestone pub in Dublin. There's live traditional music performed here every night of the week.

You can even join in if you can play an instrument or sing!

Before visiting, consider taking a trip over the river to Kilmainham Gaol Museum. It's a brilliant visitor experience; one that our tour guests rate as a Dublin highlight again and again.

This is an Irish drinking song about temperance!

The Wild Rover tells the story about a wayward son spending all his money on whiskey and beer but then promising to return home only to repent his wild ways. Sound familiar!?

And I'll play the wild rover

No never, no more

The source of this Irish song remains unknown. Some claim it to be over 400 years old. More recent versions date it to the mid-1800s.

Most popular is the Dubliners version of the song released in 1964.

We loved this song so much we named our 8 Day Wild Irish Rover Adventure after it!

It's the perfect tour of Irish pubs, music and culture with a generous helping of spectacular scenery, active hikes and bike trails.

A truly great Irish pub you'll visit along the route of the tour is Foxy John's in Dingle.

Believe it or not, this place is half-pub, half-hardware store.

Live music is played here regularly and I personally guarantee you'll never leave without a smile on your face!

Prison seems to be a recurring theme here, doesn't it?

Black Velvet Band tells the story of a man led astray by a woman. He ends up a prisoner Down Under, in Tasmania.

You'd think she was queen of the land

And her hair hung over her shoulders

Tied up with a black velvet band

In a neat little town they called Belfast

Apprentice to trade I was bound

And many an hour o' sweet happiness

I spent in that neat little town

Some versions refer to Belfast. But many singers of Black Velvet Band — myself included — have adopted the location to suit their own audience.

Since you're asking, I reckon the Crown Bar in central Belfast is the perfect pub to rehearse your acapella version of Black Velvet Band.

It's one of the oldest pubs in Ireland and has a beautifully maintained Victorian interior.

😢 The Town I Loved So Well

This is a more recent Irish folk classic.

The topic is home life during the Troubles era in Derry/Londonderry, Northern Ireland.

We hear about a simple childhood followed by the search for wife and family. Derry/Londonderry is then transformed by the 'armoured cars and bombed-out bars'.

The fifth and final verse includes a message of hope for a 'bright, brand new day', continuing,

'They will not forget but their hearts are set

On tomorrow and peace once again.'

This is one of the most emotive Irish songs ever written. Its lyrics will speak to anyone who has experienced society in an era of upheaval.

Add Bennigan's To Your Ireland Pub and Music Tour Route

Derry/Londonderry is a fantastic destination in Northern Ireland if you are looking for traditional music.

And even if you're not, Bennigan's in the city centre will have something to suit everyone's tastes.

There's a folk club on Sundays as well as open mic nights and the regular jazz gigs that Bennigan's is famous for.

Written by folk singer Phil Colclough after his first trip to the Dingle Peninsula, I think this song captures the magic of Ireland for visitors perfectly:

'Living on your western shore,

I stood by your Atlantic sea

And sang a song for Ireland.'

A Song For Ireland is the perfect soundtrack to your Ireland pub and music tour!

It references many of the sites along the Wild Atlantic Way.

From the wilderness of Burren to the rugged beauty of Donegal.

Add Friels To Your Ireland Pub And Music Tour Route

While we're on the topic of The Burren, why not visit Friels pub in Miltown Malbay if you're passing through.

It's a traditional drinking hole with regular live music.

One of the most famous Irish songs ever. Simple as that.

The song has become profoundly identified with Ireland and the global Irish diaspora in particular.

But the history of Danny Boy is far from simple.

Surprisingly, the lyrics to Danny Boy — this most familiar of Irish songs — were written by an English barrister, Frederick Weatherly, in 1912:

The pipes are calling

From glen to glen,

And down the mountain side.

The song was first made famous during the First World War by singer Elsie Griffin.

However, some connect its original composition to Rory Dall O'Cahan, a 17th century Irish harpist.

Danny Boy was originally known as the Londonderry Air/Derry Air.

Because of this, we'd recommend the final stop on your Ireland pub and music tour to be somewhere close to Derry/Londonderry once again.

Try Peadar O'Donnell's, located right in the centre of town, on Waterloo Street. A great spot for a session!

In 1990, a jazzy interpretation of Danny Boy was featured in Hollywood movie, Memphis Belle. This Harry Connick Jr. version remains one of my favorites:.

Read about our favourite musical pubs in the following locations:

Due to popular demand, I've dug even deeper into my record collection...

My colleague (and all-round hero), Bébhinn, wrote about how important Irish music is to her:

🪕 Traditional Irish Music In My Life

Need even more? Dive into my extensive Spotify playlist of traditional and not-so-traditional Irish music...

Ireland vs Scotland - Do You Have To Choose? 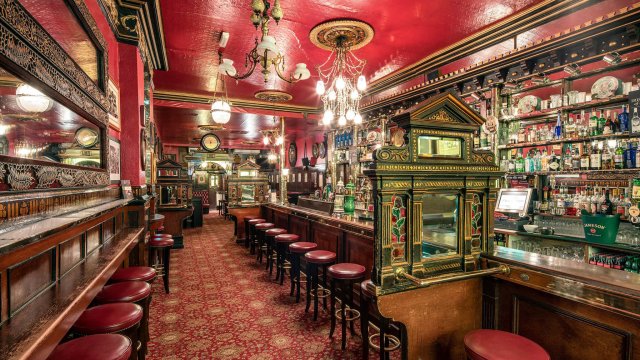